Why You Should Visit Dachau Concentration Camp

Visiting the Dachau Concentration Camp in Germany might not be something most people choose to do while on vacation. For some, the mere thought is too much. We attended Oktoberfest in Munich and made a conscious decision to visit.

First, I am a firm believer that to understand the world, you must understand its history. Sometimes, this requires seeing it with your own eyes. I wanted to see firsthand what the concentration camp looks like today.

Secondly, I wanted to see how these death camps are positioned. For example, are they marketed as history? Do they portray an accurate representation of what happened? Do they honor the lives lost? Or is there an inch of pride lurking in the shadows like American Plantations?

Lastly, I wanted to see the location, the surrounding area and experience the grounds.

Some people claim that the Dachau Concentration Camp Memorial Site is exploitation. However, it came to be “on the initiative of and under the surviving prisoners’ plans” who joined the Comité International de Dachau.  It is not exploitation; it reminds and informs people of the events under Hilter’s leadership.

The memorial opened to the public in 1965 and welcomes around 900,000 visitors each year.

Should You Visit Dachau Concentration Camp?

Yes, however, you will need a strong stomach to face Dachau. Any visit to the Dachau concentration camp will put you up front and center with the greatest crimes against humanity.

Until you have visited a concentration camp, you will not understand the true depth of the Holocaust. Some people will say that this is a place you should not visit – I’m afraid I have to disagree. Dachau concentration camp is not a tourist attraction; it is a memorial to the thousands of people who died in conditions so disgusting and vile that it is difficult to write about.

Most importantly, a visit to the Dachau concentration camp dispels any myths or attempts to diminish the Holocaust. You only need to be there for five minutes to understand the reality and scope of the lives lost.

Dachau, by all accounts, was the testing ground for a much larger-scale genocide.

I think everybody has seen photographs of the train leading up to the gates of concentration camps. I will be the first to confess conceptually this is not what I imagined.

When you first arrive, you go to the visitor center; it is here where you will start your journey.

You will walk down a path from the visitor center that takes you to the train station’s actual remains and the main entrance, the God-awful gates that anyone would recognize.

Two things struck me as odd.  The first one is that as you walk up to the gates, an enchanting river flows beside you, creating the illusion that you are in a park. The second oddity behind the river is a community of two-story row houses occupied to this day. The backyard view is literally a view of the concentration camp. When I tell people about our visit to Dachau, I make a point to tell them that there is a community that lives right next door.

As you approach the infamous gates, there is a feeling that comes over you that I can only describe as cold.  I do not mean cold in the physical sense. Granted, the day that we visited was not the warmest. I mean, there is real cold soberness that lingers in the air.

However, there is no freedom at Dachau.

Once you get beyond the gates, what may have started as a good day is about to turn into one of the saddest days of your life. For context, Brian only viewed the first prison bunker and then left sick to his stomach.

Following the prison cells, you head to the main courtyard. The first thing you will come across is the rack. It does not take very much study or imagination to understand how this contraption was used.

Human beings were hung in various positions from these contraptions for hours on end in freezing conditions. It is known as the so-called “tree or pole hanging.” There is something undeniably chilling about this contraption.  This is where I started to feel death.  Even if you try not to imagine what happened, the images come to you vividly. No pictures of the victims are required.

And the courtyard was where prisons would stand in freezing conditions for hours on end during a roll call or prisoners’ count. Just one of many cruel punishments endured.

Dachau consists of 32 barracks, 30 of which were accommodation barracks. The two barrack structures that are there today are replicas that were erected in 1965. Each of the accommodation barracks was designed to hold 200 people. Before the closure, the barracks were holding 2,000 prisoners. In these bunkers, people lived on top of each other, literally sleeping in quarters the coffin’s size. In fact, the sleeping arrangements look like coffins. I wondered if this was deliberate.

The Remains of the Barracks

As you leave the reconstructed barracks, you then walk through the ruins of the original ones. Quite possibly the largest display of inhumanity you will ever see. There is a brick boundary for each barrack, and a stone number identifies the barrack.

There are beautiful trees to lessen the blow. Sadly, as beautiful as the trees are, they do nothing to dimmish the reality of what you are seeing. 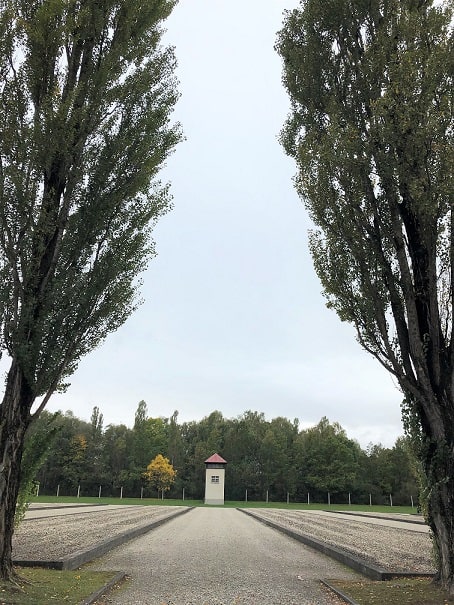 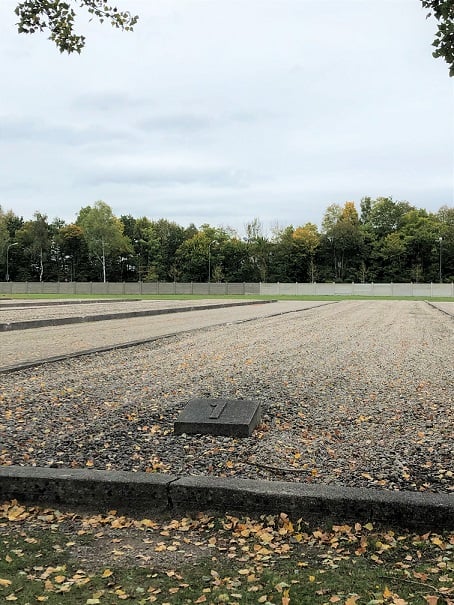 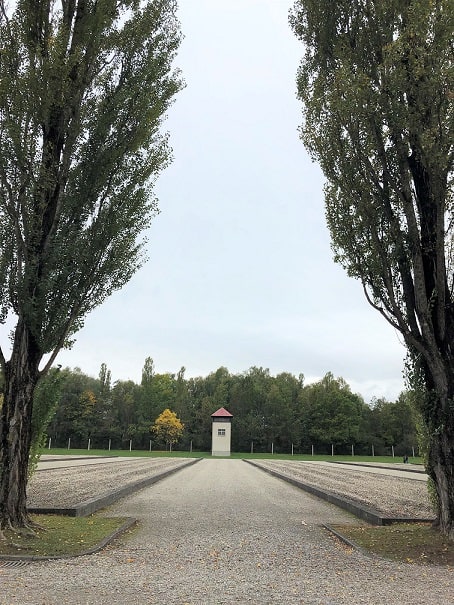 There are many memorials at Dachau through the complex. I found the memorials touching. Germany, while she cannot erase her history, she has accepted it. And, most importantly, Germany does not hide or downplay the atrocities. There is no sugarcoating.

Rather, Germany pays respect and uses the opportunity to educate the world. Something Plantations in American should consider.

At the end of the barrack rows, you get to a bridge crossing the river. Sadly, I had no preparation for what was next.

I would strongly advise you to think about crossing the bridge. Be prepared to see things you cannot “unsee.”

The bridge looks inviting. There is a chapel that is inviting – the irony of it is disgusting. If you cross the bridge, you will witness the gas chambers and the crematoriums.

There are two crematoriums. The original one was too small to handle the volume. Then, the larger version was commissioned to manage the volume of dead bodies.

The gas chambers at Dachau were not used for mass execution. There are varying accounts of the intent, and the most likely one being testing the capability and design of things to follow. And they were used on a small scale purely for execution.

There are no words to describe seeing the crematorium. A picture says it all.

If you have not heard of or read about Sigmund Rascher – do so. It was at Dachau that hundreds of people were subjected to medical experiments, often resulting in death.

Some examples of experiments:

Getting to Dachau Concentration Camp

Located just 10 miles from Munich, it is easy to get to Dachau. You could drive or take an Uber; however, it is much easier (and cheaper) to take the train and bus.

Purchase a single-person day ticket called “Munich XXL.” This covers all the public transit you need for the day for a 24-hour period.

Getting back is as easy; reverse the route.

Where To Say In Munich

I will never forget what I saw at Dachau Concentration Camp.  I will never understand anyone who still believes or thinks the Holocaust was made up.

If anybody believes that it is made up, they need to take a tour through some of Europe’s concentration camps.

While I learned new historical facts, I left with a heightened sense of appreciation for people’s struggles.

I cannot say that this is for everybody. I found our tour depressing and disturbing.  Easy for me to say as a spectator because I did not experience the horrors. However, the whole point of visiting a concentration camp is to pay respect, learn, and remember.

You can visit a museum, and you can watch a movie, read a book or listen to a podcast on the holocaust. Yet, until you have been to an actual concentration camp, I do not think you can fathom the depths of cruelty that racism and genocide caused.

For this reason alone, I recommend that anybody in Germany takes the time to pay their respects to the millions of people who lost their lives during the holocaust.