Sitting in the southeast corner of Bavaria bordering Austria is Linderhof Palace. The lesser know homes of the famous King Ludwig and one often missed by tourists.

Bavaria is the Land of Castles. If you visit Bavaria, Germany, you will see Neuschwanstein Castle – the “Disney Castle” most famous.

King Ludwig died before the completion of Neuschwanstein Castle and never lived in it.

Instead, he spent most of his time at the smaller Linderhof Palace – the only palace he finished.

Formerly a farm owned by Benedictine Abbey of Ettal. It was then turned into a hunting lodge by Century King Maximilian II – Ludwig’s father. His son Ludwig II bought the land surrounding it with the idea of building a country retreat.

Georg Dollmann was the architect, and the palace was finished in 1879; in 1880, the gardens were completed.

The Inside of Linderhof Palace

To view the inside of Linderhof Palace, you must take a guided tour. A common theme for all the castles in Bavaria. Tours are timed and are available in various languages.

You start the tour at the audience hall, where you get your first glimpse of how small this palace is. The audience hall is not impressive; it is small, drab, and almost emotionless.

Do not despair; you will see more than enough overdone gilt decorations synonymous with the time as you continue.

You will continue up the main floor from the audience hall, where you will tour the main rooms positioned on a corner of the square-shaped palace.

All the formal rooms are connected to the strangest receiving rooms. Odd because they are tiny and extravagantly decorated in what I can only describe as entirely tasteless. Claustrophobic and then some. 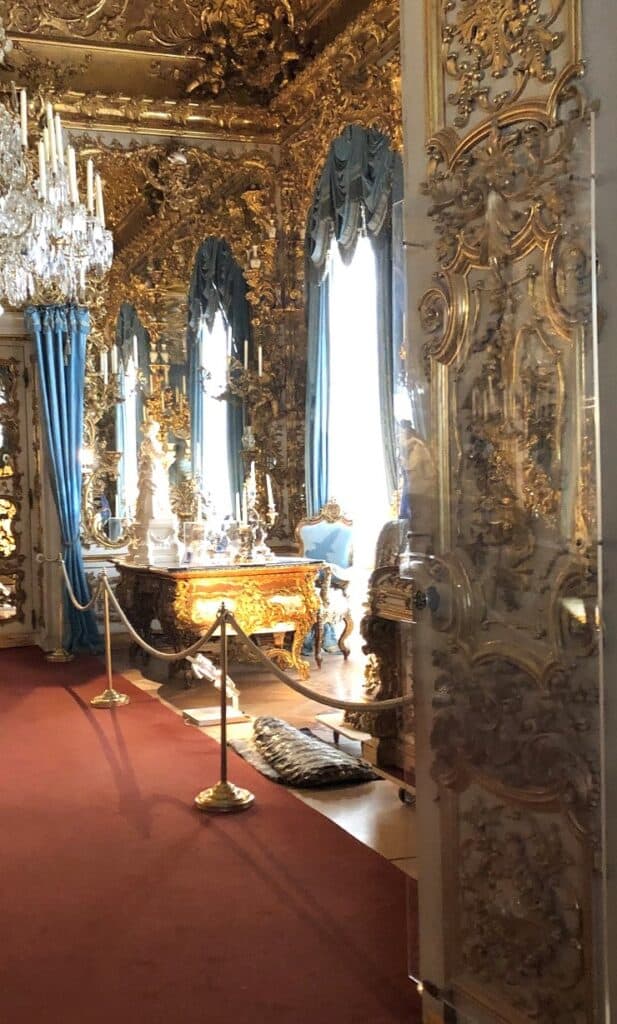 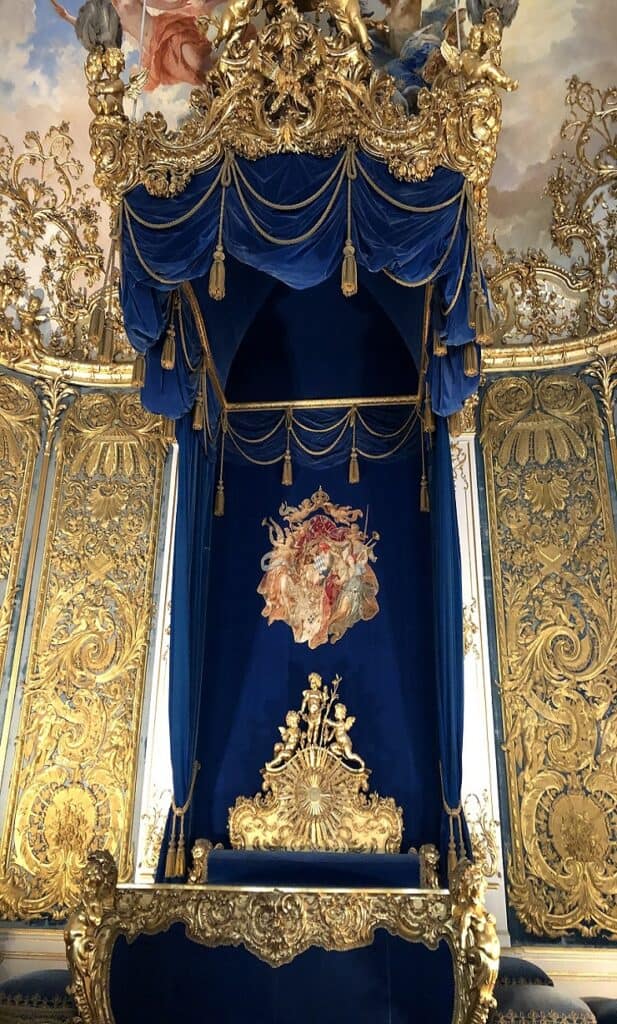 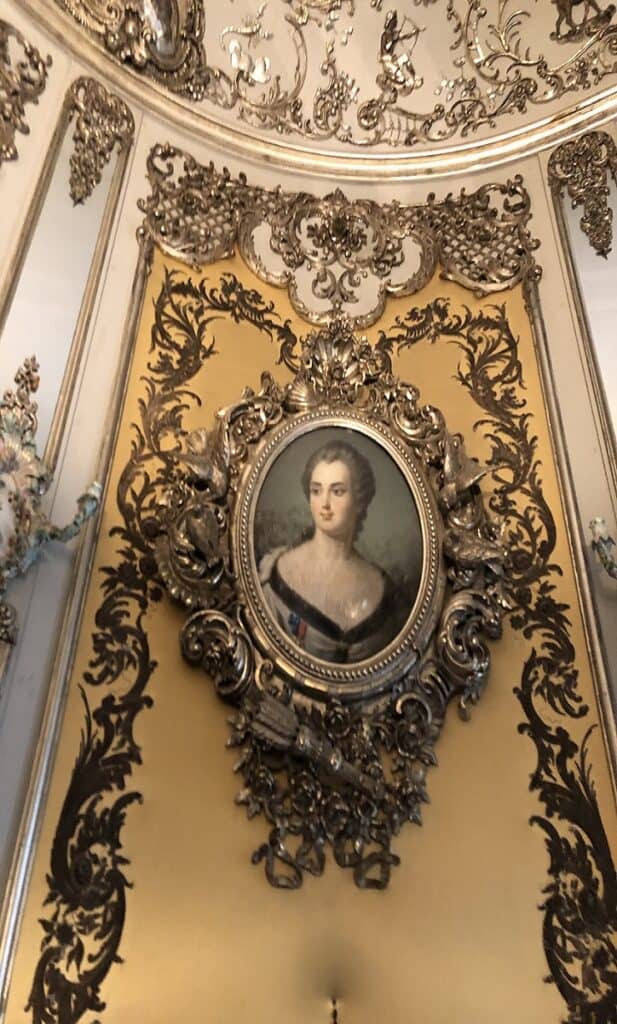 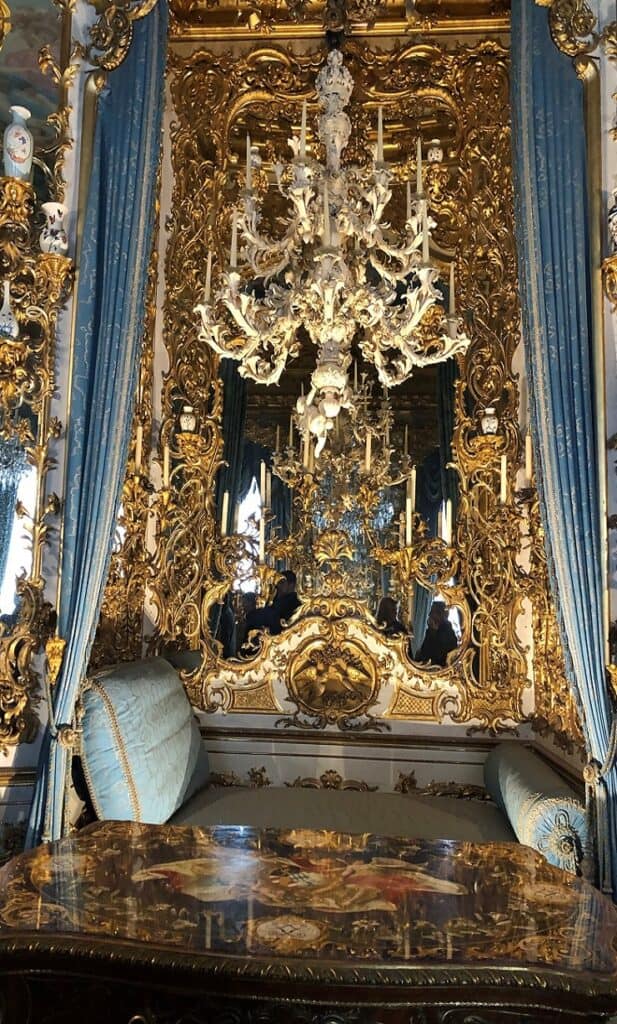 An overabundance of gold molding, ceiling frescoes, tapestries, and ivory candelabras will make your head spin if your eyes can handle it. Add to this that each room has a striking deep color scheme from peacock blue to emerald green.

I felt physically dizzy leaving the palace tour. It reminded me of the feeling you get after coming off a Waltzer. And all due to the overkill of opulence upon opulence.

There is no single square inch of wall or floor left untouched.

Outside the gardens, I still cannot fathom why the king found the palace’s interior relaxing.

The Hall of Mirrors

A copycat of Versailles, the Hall of Mirrors is a room where the king enjoyed lighting thousands of candles at night and then admiring the reflections in this mirrored hallway.

It is well known that Ludwig was a night owl. He would stay up all night and sleep all day. The Hall of Mirrors was heaven for the king. Yet, he also used the room as a living room.

For me, the gardens were by far the highlight of the visit. Unlike the inside, the gardens are tasteful, appealing to the eye, and enchanting.

Considered ornamental gardens, the gardens are a mix of various European styles.

The central garden that sits in front of the entrance was my favorite. A large pond with a gold waterfall is the main feature, complimented by a decadent wall of winding stairs leading up to the focal statue.

I must imagine this is the real reason that the king chooses to spend most of his time at Linderhof Palace.

Lastly, even though the inside of Linderhof Palace is odd, the outside is a slice of heaven. For this reason alone, it should be on your list!

A standalone building on the grounds, The Moorish Kiosk was initially created for the World Exhibition in Paris in 1867.

King Ludwig II purchased it in 1876 and outfitted it with a peacock throne, a marble fountain, and glass chandeliers.

Ludwig liked to drink tea here and had his servants dressed in Oriental costumes to enhance the experience.

The Moroccan House was built in Morocco for the International Exhibition in Vienna in 1873. The king bought it in 1878 and redecorated it to Linderhof Palace.

Sadly for us, Venus’s Grotto was undergoing renovation during our visit.

The opera Tannhauser inspired the grotto. Decorated with a waterfall, changing colors, and dressed in gold, the grotto might be the most elaborate artificial cave ever.

Ludwig’s boat is on display inside the grotto, a boat he enjoyed rowing across the grotto.

Linderhof Palace is near Ettal Abbey in the village of Ettal.

Essentials You Will Need To Enjoy Linderhof Palace

On route to Linderhof Palace, you will pass through the Austrian town of Millstatt.

You must make a point of stopping here.

I would suggest a lunch stop, but at a minimum, stop and view Lake Millstatt.

This lake is possibly the cleanest lake I have seen to date. It is crystal clear, bright blue and green, and draped in the mountains. 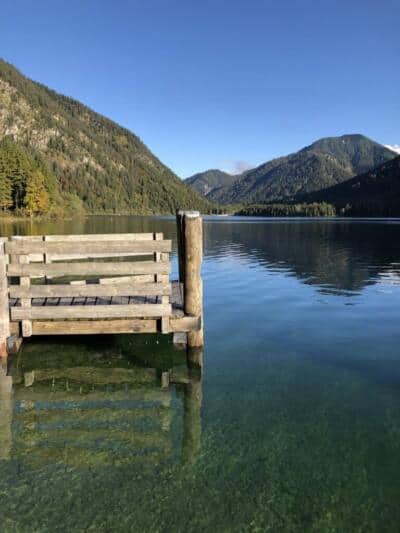 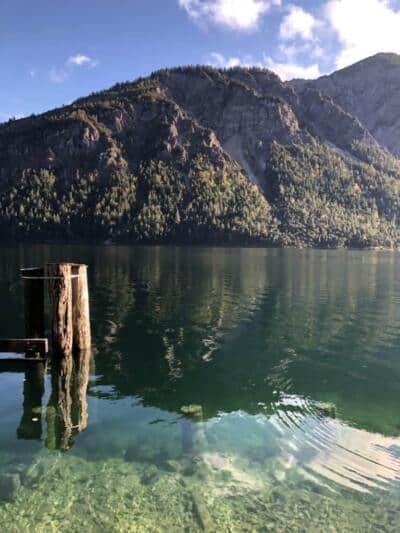 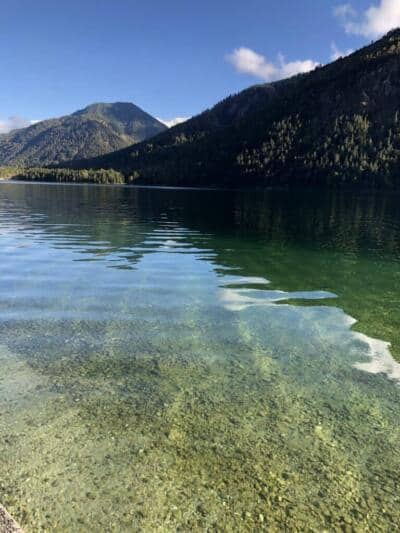 In addition to the lake, the town has several miniature chapels worth exploring.

You can buy a ticket to Linderhof Palace on the same day. However, I strongly recommend that you purchase tickets in advance just in case. While not as famous as Neuschwanstein Castle or Hohenschwangau Castle, it’s better to be safe than sorry.

Children under 18 and students are admitted free of charge.

The palace and grounds are not open year-round. They are available from April-15 October. And, some park buildings (except the Royal Lodge) are closed during winter.

To understand Ludwig, a visit to his actual home is a must.

Understated and often ignored viewing of the palace is what I would call the trifecta of Ludwig.