Biarritz France is considered one of the most beautiful beach resorts of the French Basque Country. A stop here will not disappoint! This region allows you to enjoy a wide variety of beach and historical activities that most international tourists skip.  This city has so much to offer tourists who want to enjoy France’s charm, history, and fabulous food scene. Biarritz is popular with the Spanish since it is located a few miles from the border of Spain. Packed with important historic architecture, full of imperial villas and palaces from the 19th century.

This city has a deep history. It was the favorite city of Empress Eugenia, wife of Napoleon III who used to spend her summers here.

Biarritz offers up stunning beaches ideal for sunbathing or surfing.  This historical beach hub influenced by Napoleon III will meet your expectations. So, if you are going to Biarritz for the first time, we will show you the must-see places and things to do in Biarritz! 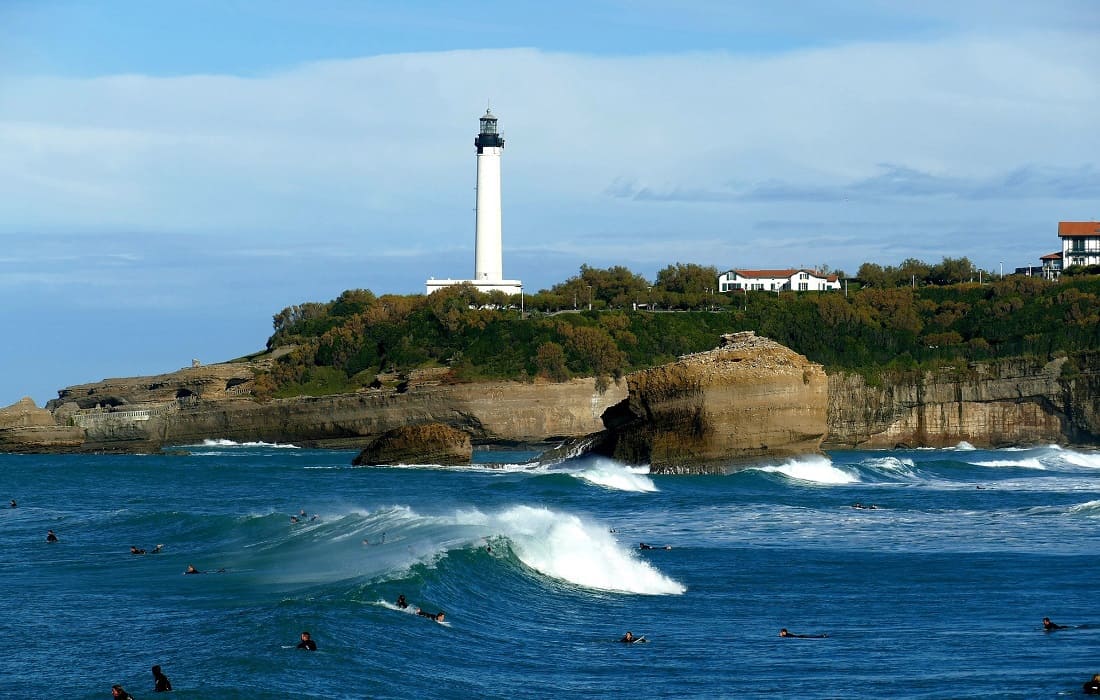 Located in the French Basque Country, in the Aquitaine region, this is a trendy destination for tourists. Biarritz France has been an important beach resort since the 19th century. It is considered an elegant and aristocratic place to visit. This city was the favorite summer resort of Empress Eugenie, wife of Napoleon III. Her influence and love of the area made it go from being a small fishing village to a fashionable city in the south of France. To entertain the court, Napoleon III decided to build a big palace. Today, this palace is known as the Hotel Du Palais – and you can stay in it! Visiting Biarritz started to gain popularity due to the fact that it was frequented by members of the royal family. Both French and British royals flaunted around in this area as did the high classes from other countries such as Russia.

Today, the city remains popular.  It is considered a trendy destination and is frequented by the French, British, and Spanish. Lastly, it is a sought-after destination for surfers.

What To See And Do In Biarritz France?

One of the first things you should do is take advantage of the spectacular beaches on the Atlantic. Biarritz has beautiful beaches. The beaches are one of the biggest attractions of the city. This makes Biarritz especially attractive during the summer months. There are lots of things to see and do in Biarritz.  However, it is spectacular beaches that have landed Biarritz a worldwide spotlight.

The World Surf League is held on the shores of Biarritz. This competition attracts surfers from all over the world to visit Biarritz. The significance of surfing in Biarritz is obvious in the city. As you walk through the city center, you will experience shops dedicated to this water sport. All the big names are here like  Quiksilver and Rip Curl, to name a few. 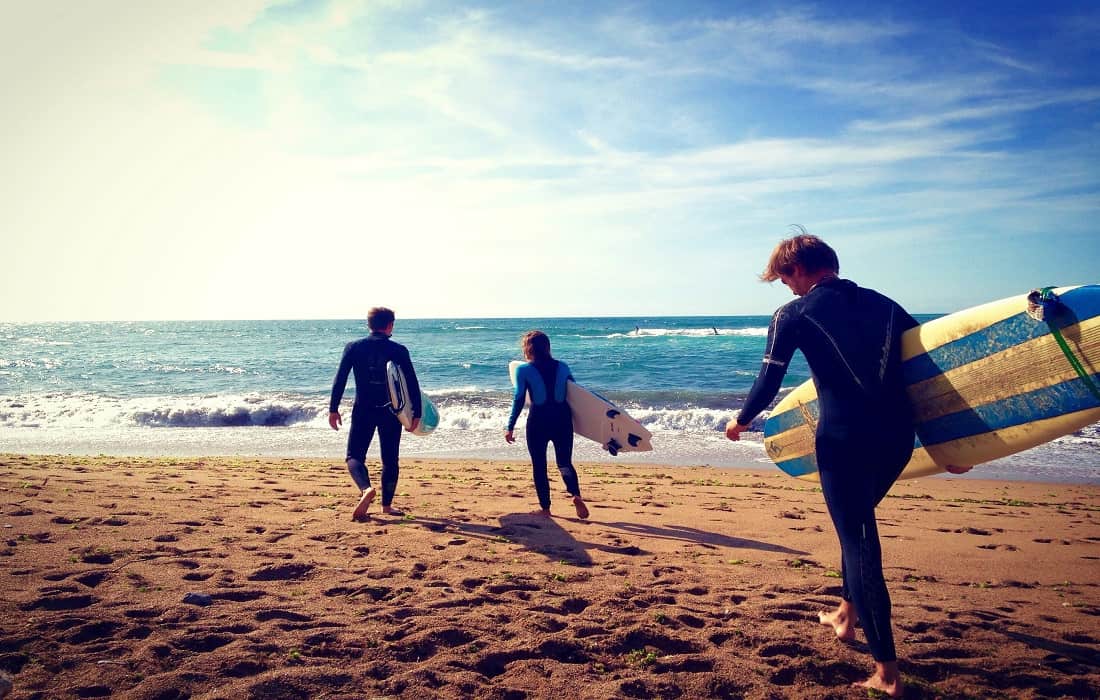 If you want to take surf lessons head to the Costa de Los Vascos beach in Biarritz. Here you can take lessons from professionals or try learning on your own.  Don´t forget there will be many experienced surfers in the area.  You can also ask them for tips about surfing in Biarritz!

Where To Stay In Biarritz France 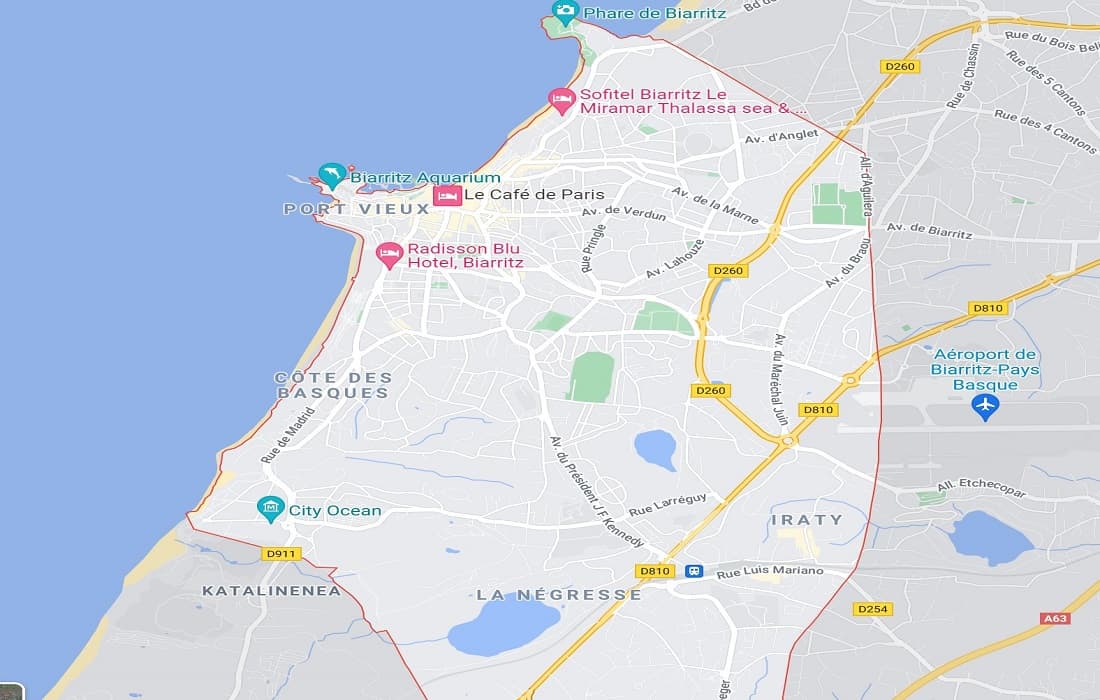 A visit to the Grande Plage De Biarritz is a must. Despite being a crowded and popular beach due to its location don’t skip it. Just five minutes from the city center this beach is can be accessed by walking from the city center. It is located at the height of the Hotel du Palais.

This is an urban beach, a fashionable beach that is well-known thanks to its colorful tents, which can be reserved.  This beach stretches from the Rocher Du Basta to the Biarritz lighthouse.  Hugely popular in the summertime given the weather.

La Grande Plage is located next to a beautiful promenade packed with restaurants.

This is a small beach located by the Port of the city but still, close to the city center.  The water here is typically warmer which makes swimming more enjoyable. This small beach is where the port used to be. Bars surround the beach and it is great for sunbathing.  Located in a rocky cove, this sunny spot is protected from the wind. And, there are not as many waves as on the other beaches. A calm and beautiful beach that can be enjoyed morning noon or night.

Other Beaches In Biarritz France

Other popular beaches you should visit are Miramar Beach (Plage du Miramar) and La Milady Beach.  Miramar Beach is a small urban beach that is famous for being calm and quiet. It is located close to the Hotel du Palais. In front of this beach, you will find La Roche Percée. A famous rock that can be seen from the beach and is recognizable to many. You can also see from the lighthouse from here and surfing is popular on this beach. 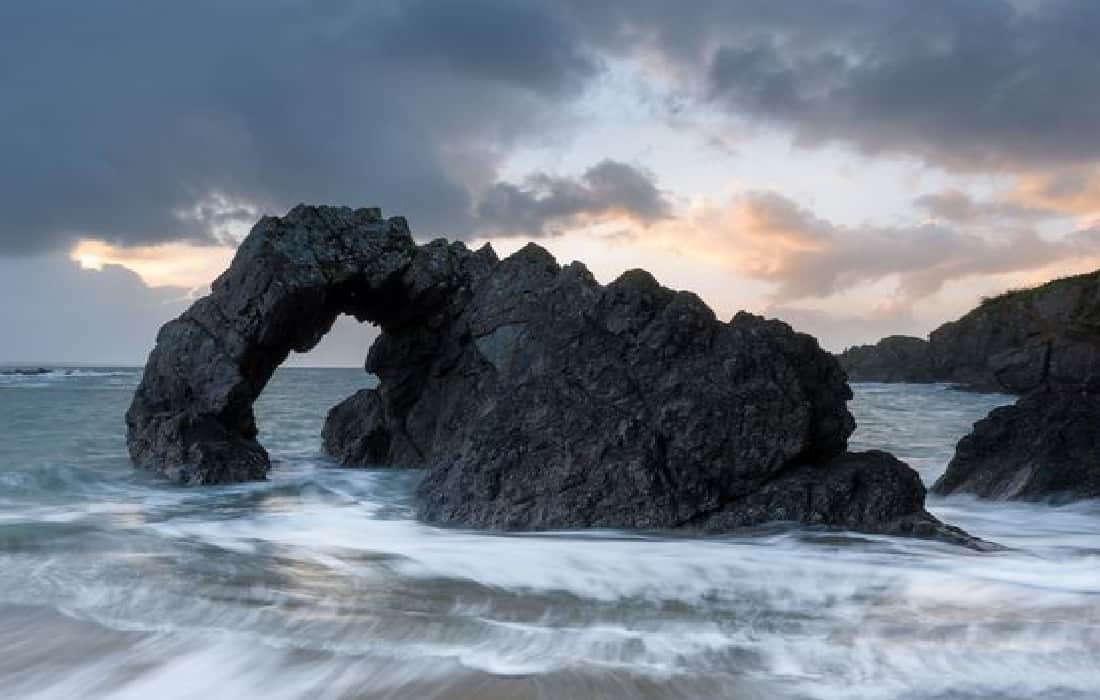 Despite not being a huge city, Biarritz has a lot to offer those that visit. Start with a tour around the city or in the city center. Visit the Casino and The Grande Plage. Then, head north to see the Biarritz Lighthouse, the Hotel Du Palais, and the Orthodox Church. Lastly, head south, to visit the  Church of Santa Eugenia, the Rock of the Virgin, the Museum of the Sea, and the Old Port. Most of the attractions to see in Biarritz are by the sea, with unbeatable ocean views.

Hôtel Du Palais is a symbolic hotel of Biarritz overlooking the Atlantic Ocean. Founded at the end of the 19th century it was the former imperial residence of Napoleon III and Empress Eugenie. This is where they used to spend their holidays in the city. This palace was once called  “Ville Eugenie” after Napoleeans wife.

This magnificent period palace was designed by Hippolyte Durand. Hôtel Du Palais is located overlooking the sea between The Grande Plage and Plage Miramar. It is the most emblematic building in the city and the most vivid reminder of Empress Eugenie.

The imperial residence was commissioned to be built in 1855 by Napoleon III and his wife and shaped like an “E” to honor Empress Eugenie.  This iconic hotel was bought by a bank at the end of the 19th century. It was then transformed into a hotel-casino and renamed “Palais-Biarritz,”.

At the beginning of the 20th century, it burned down. Following the fire, it was passed to the city council who rebuilt and restored, it to its former glory. Now it is one of France’s most iconic luxury hotels. 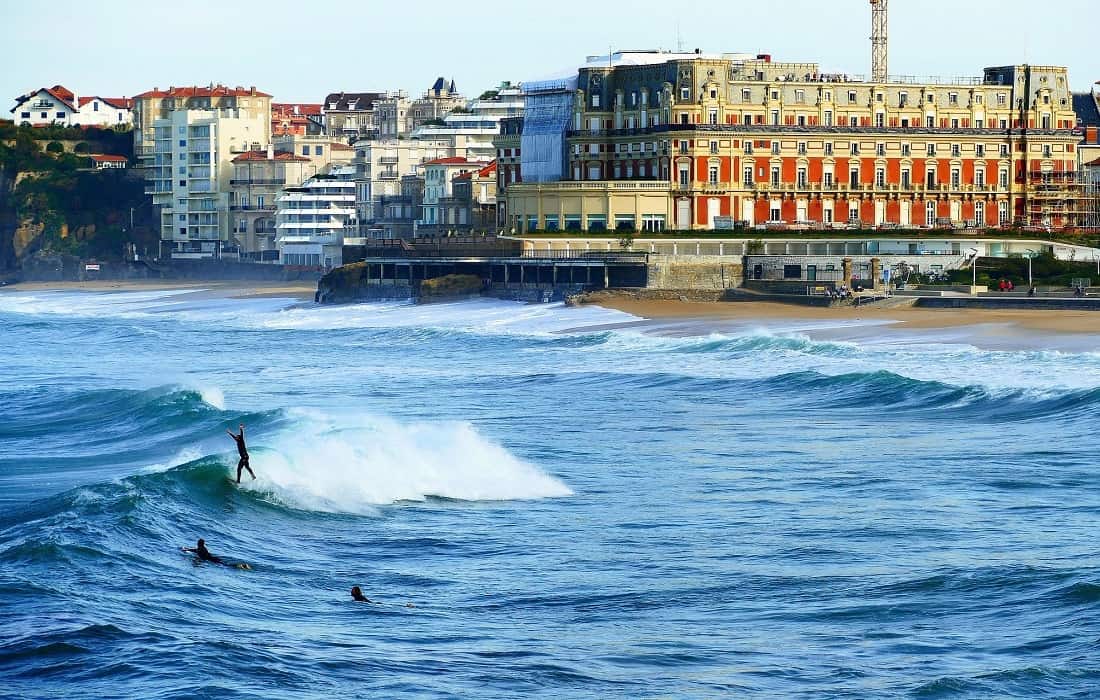 The Casino is perhaps one of the best examples of art deco architecture in Biarritz. It’s the same architecture that can be seen in Miami Beach that was all the rage in the 1920s.

Built in 1929 by Alfred Laulhé, this spectacular casino has an unbeatable location in the city’s heart and direct access to the Grande Plage. In addition to the casino, today it houses a theater and a swimming pool. From the terrace, you have a magnificent view of the beach and surrounding Biarritz.

Another place that is recommended is the central market called Halles De Biarritz.  Visit the local market to discover Biarritz’s humming atmosphere and explore the city’s culinary identity. You can go here to sample and buy local and regional specialties such as Bayonne ham, oysters, or cheese.

Like many of the attractions in Biarritz, this church is located near the Hôtel du Palais.  The church has a special architectural style that will undoubtedly remind you more of Russia than the French Basque Country. And for a good reason, it was built in 1892 in a Byzantine style by the French architect M. Tisnés.

Russians who came to Biarritz on holiday bought a piece of land to build a church so that those who chose to live here could attend Orthodox services. The church is definitely a place to see during your trip to Biarritz.  Located in the city center in the Avenue de L’Imperatrice it will remind you of Saint Petersburg! 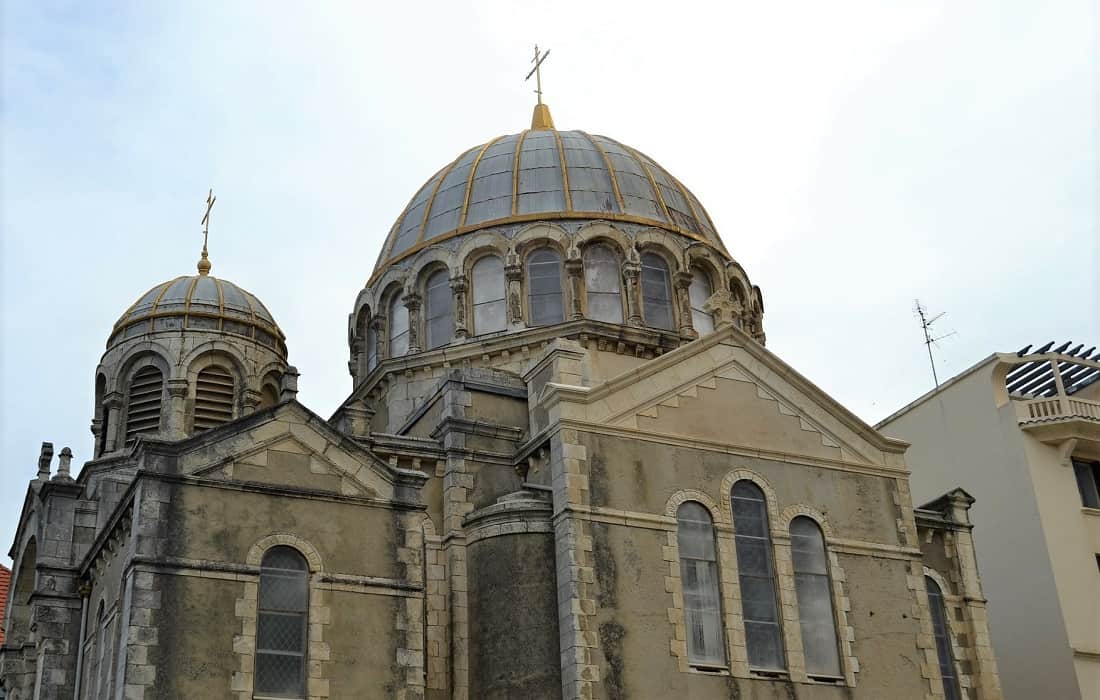 The Rock Of The Virgin Mary – Ville Impériale

The Rock of the Virgin or Rocher de la Vierge is also an exciting place to visit. It is a rocky outcrop featuring a symbolic statue of the Virgin Mary on the top of an observation deck facing Biarritz’s Port Vieux.

It was placed there to protect the sailors that went every day to the sea. Legend has it that fishermen from the port of Biarritz were caught in a terrible storm while out at sea hunting whales. A divine light guided them back to port and the survivors erected a statue of the Virgin Mary in gratitude.

Napoleon III decided to cut a tunnel through the rock and had a bridge built to make it accessible from the seafront. The first wooden bridge did not withstand the crashing waves of the Atlantic Ocean. However, in 1887, Gustave Eiffel was instructed to design a metal bridge, which still stands today.

The rock is also referred to as “Virgin on the Rock, Biarritz France”. 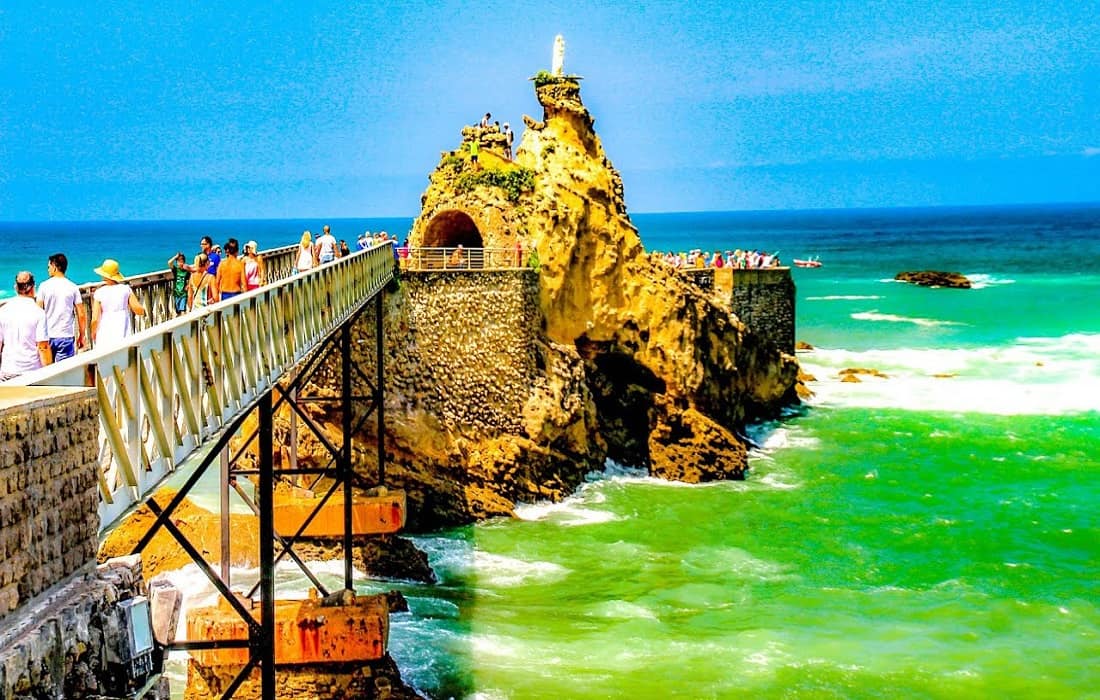 Museum-lovers are in luck. Biarritz is home to many museums. Some of the main ones are:

Did you know that the chocolate from the neighboring town of Bayonne is very famous? Here you can taste some of the best chocolate in France!. If you have the opportunity to visit Bayonne, you should also visit its Chocolate Museum. This part of France is prevalent for making fantastic chocolate art pieces.

A trip to Biarritz France is the perfect way to enjoy a summer vacation in Europe. In addition, it is close to other important tourist towns such as Bayonne, Hendaye, and Saint Jean de Luz – which are beautiful towns with special charm.

Given that Biarritz is a popular city it is not cheap. And, finding affordable accommodations can be a challenge. If you are looking to save money consider staying in Anglet. If you want more options of where to stay while visiting the French or the Spanish Basque Country consider San Sebastián Apartments, where you can have a kitchen if you want to cook your own Basque meals and keep enjoying and discovering the Basque Country.

Looking for more posts on things to do in Europe, start here: