The Cape Romano Dome House is not technically on Marco Island, Florida.  They are located on the following Island down called Ten Thousand Island and are only accessible via water. The Island belongs to a larger group of Ten Thousand Islands. It was built by Bob Lee, a now-deceased retired oil producer, in 1980. The self-sustaining solar-powered dome homes started as a dream vacation home.

2022 – The Destruction Of The Dome Houses of Cape Romano

Sadly, as expected, The Cape Romano Dome Home has been destroyed and now lies at rest. The iconic dome homes at Cape Romano didn’t make it through hurricane Ian. Ian was simply too much and the once beloved attraction and historical building is now under water – permanently.

The Dome Homes survived Hurricane Charley in 2005, Wilma a year later — when it actually made U.S. landfall at Cape Romano — and Irma in 2017.

Don’t despair; you will still be able to view them underwater as they take a new shape as a reef.

History Of The Dome Houses of Cape Romano

The Dome Houses of Cape Romano are not technically on Marco Island. They are on the next island, Ten Thousand Island, which is only accessible via water.

They were built by Bob Lee, a now-deceased retired oil producer, in 1980. The self-sufficient solar-powered dome homes started as a dream vacation getaway.

When Were The Cape Romano Dome Houses Built?

Lee started the construction in 1980 and completed it by 1982. Lee purchased a barge to move the necessary supplies to build the dome homes.  The masterpiece consisted of six connected dome structures for 2,400 square feet. The house boasted three bedrooms and three bathrooms.

Why Build The Dome Houses?

According to the family members and locals alike, Lee did not like corners and felt they were wasted space. It’s also been written that he built a dome style to capture runoff water as the main supply for the house.

In 1984, the Lee family decided to sell the dome homes but repossessed them in 1987. The family moved in a few years later, and the dome houses became their primary residence. That is until 1992, when Hurricane Andrew hit South Florida. While some windows broke, the structure remained intact.

Fast forward to 2005. At this point that the family decides to sell the property to John Tosto of Naples, Fl.  Tosto planned to renovate the homes, but a sea wall was required and sadly never built. In 2005, Hurricane Wilma damaged the house and severely eroded the beach, ending the renovation dream.

As the years went on, the beach eroded more and more, making the once dream beach home an abandoned water-logged ruin of its former self. In 2017, sadly, Hurricane Irma hit, and two of the original six domes were sunk. You can still see the tops of the domes, but they are submerged. By 2016, the house was approximately 180 feet offshore. Today, the dome homes stand about 200 feet away from the beach.

Photo of the Florida Dome Homes While On Land 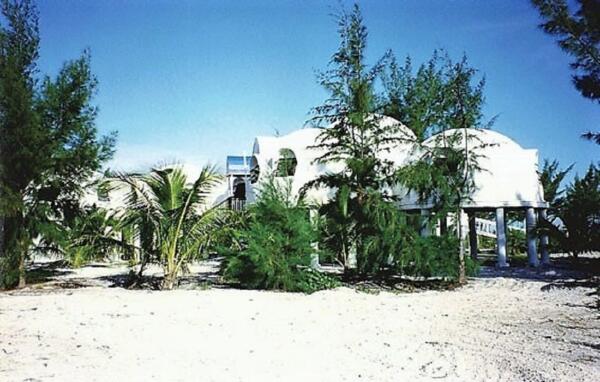 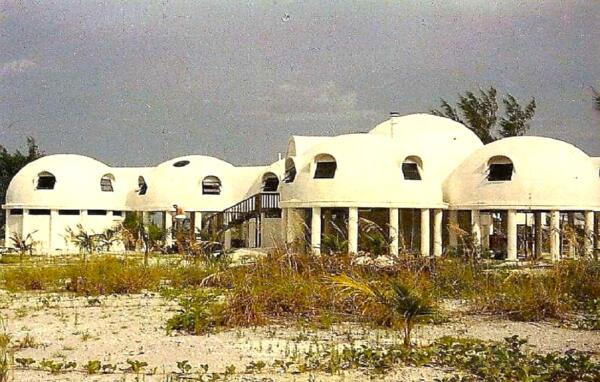 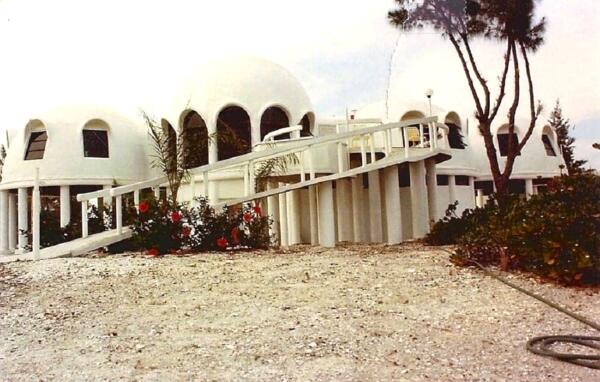 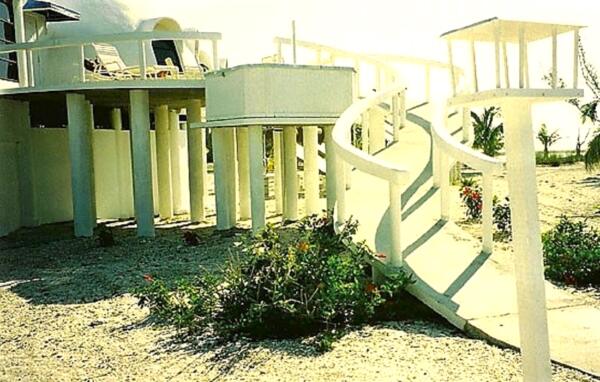 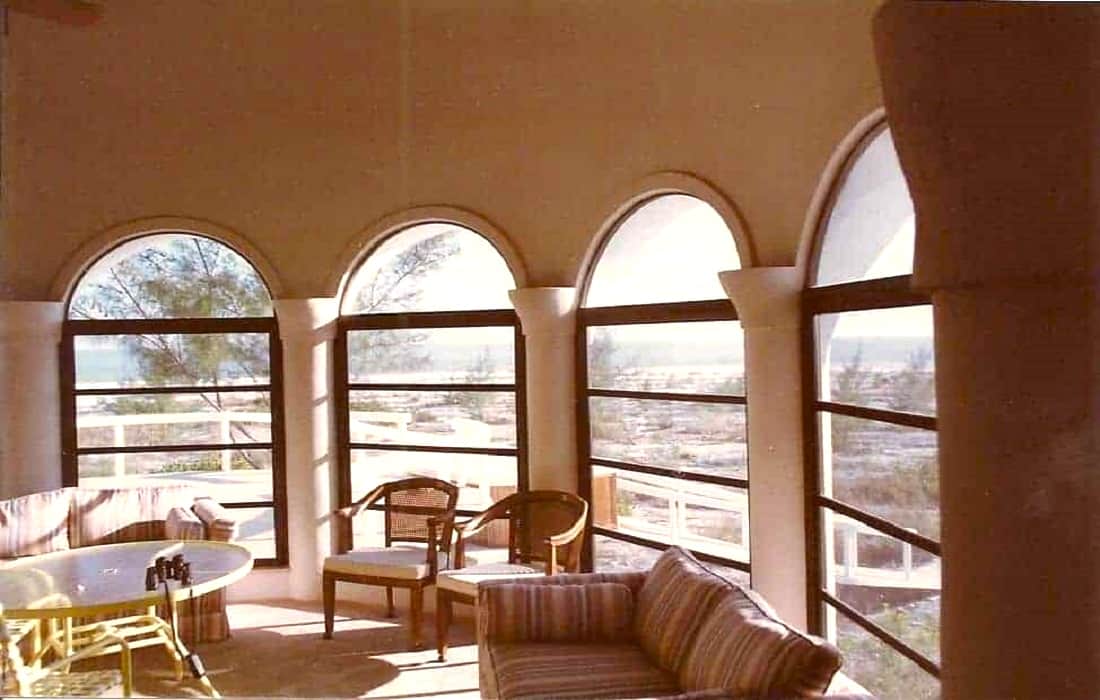 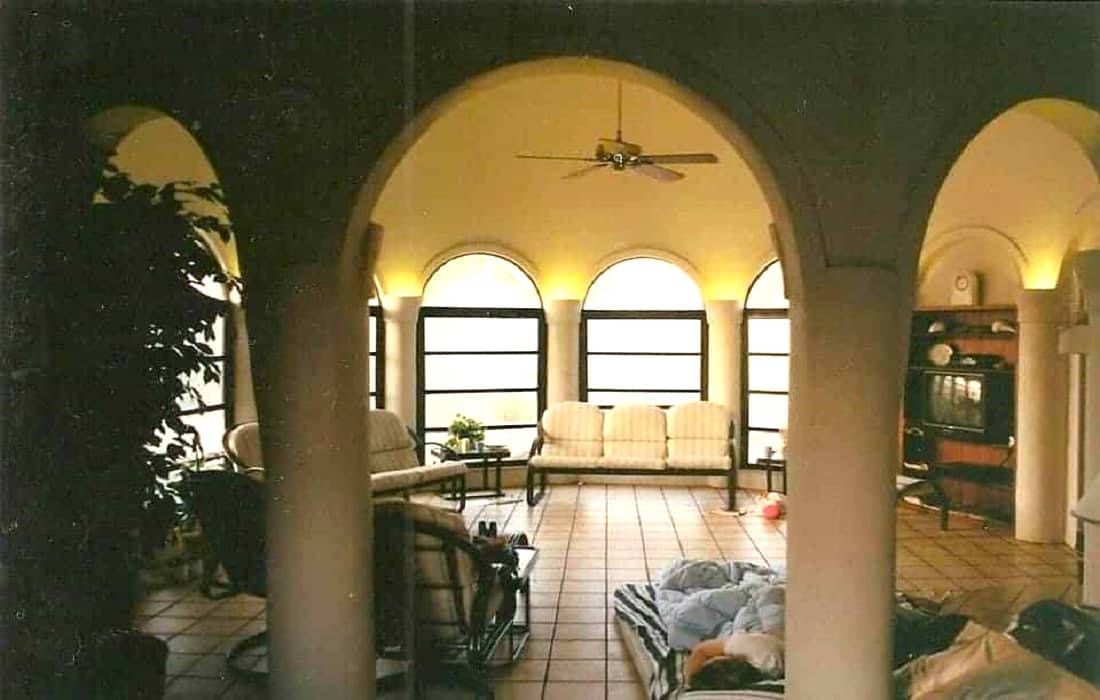 I have always had an obsession with dereliction.  It’s a thing called Urban exploration (often shortened as UE, urbex, and sometimes known as roof-and-tunnel hacking). Who knew?

For me, it started when I was growing up in a neighborhood full of empty buildings filled with vintage goodies.  I thrived on rummaging through the left behind artifacts of years gone by. A favorite for me was an old hotel at the end of our street, where the other kids and I would explore for hours.  I find myself daydreaming about how and why a place is derelict. The mystery of places frozen in time is chilling and surreal. It provokes imagination, followed by a burning desire to research why. This is the second part of the fascination – I love history!

Given my obsession visiting The Dome Houses of Cape Romano was a must! I’ve done many tours seeking various abandoned places from homes, mansions, castles, and cities! But never have I explored a water-bound abandoned house.

Seeing The Cape Romano Dome House in person is an exhilarating experience. When the domes appear in the distance, you will recognize the alien-like shapes. The sun is beaming down on top of the birds that now call them home. As you get close, you will see the graffiti that now adorns them. You will also look at the underwater domes’ rims – a stark reminder of the decrepit state. Every abandoned building has a story, but Cape Romano Dome House is unique. Most of all, it will not be with us much longer. It’s only a matter of time before another storm crumbles the remaining four, eliminating this treasure forever. The Cape Romano Dome House survived the 2019 hurricane season, and fortunately, Dorian did no damage.

If you plan on visiting Cape Romano, you will have to get there via water. There is no bridge to the Island. Some people kayak, some go on paddleboards, some boat. It could be as much as a five to seven-mile trek depending on where you start, so plan carefully. Here are some maps to see before deciding if you will go solo or take a tour.

Can You kayak To Cape Romano?

Yes, you can, but you need to be physically fit, know your way around, and check the tides long before taking off!

How Do You Get To The Cape Romano Dome House?

As mentioned, the home is only accessible by water. So you either need to navigate there on your vessel or take a tour.

We choose to take a tour to explore the islands and the dome houses. A brilliant decision for several reasons.

We took a 2.5-hour tour, and our guide was fantastic! The tour guides are brilliant,  local Floridians who know the waterways like the back of their hands and are also expert boaters! I can’t say enough good things about this tour. The tour guides carefully navigate you through no-wake zones while stopping along the way to capture photographs of you!

In addition to seeing The Dome Houses of Cape Romano, we also got up close and personal with a family of dolphins! An added and much enjoyed bonus.

If you want a really exciting way to view the dome houses, rent a Craigcat catamaran! There’s no better way to explore the Ten Thousand Islands area than by boat. Join a guide and drive your own Craigcat catamaran to explore the region. Enjoy a slow ride down a quieter canal and keep your eyes peeled for local wildlife including alligators, dolphins, manatees, and stingrays. Then, hop out at White Horse Key to walk around and collect some shells before heading back.

Where To Stay In Marco Island 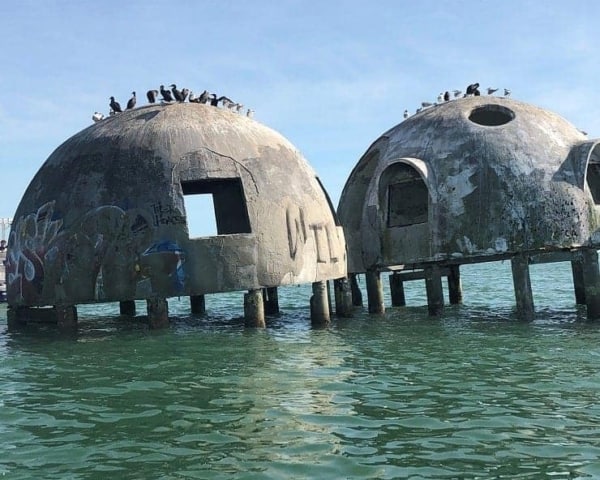 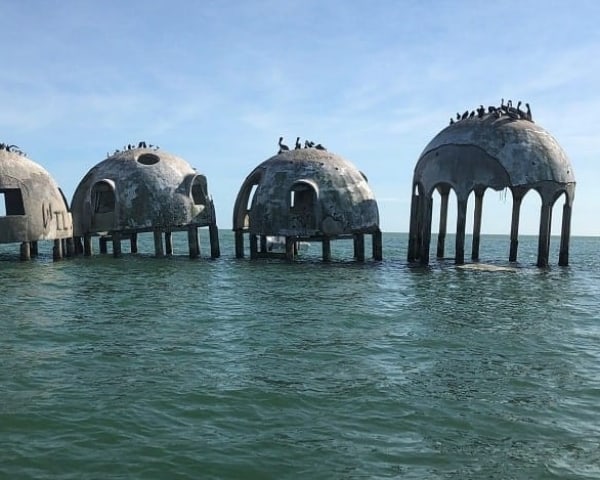 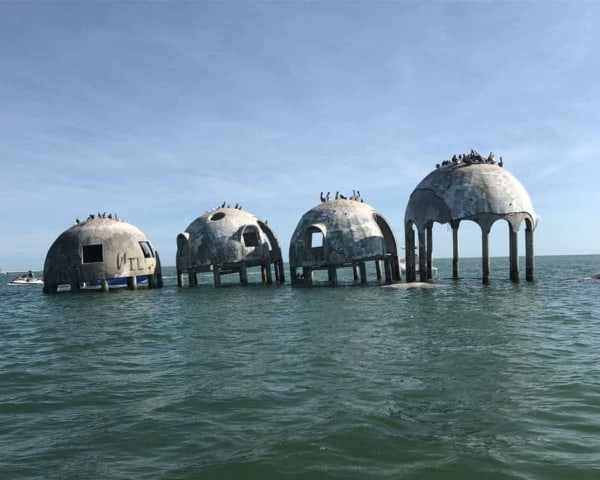 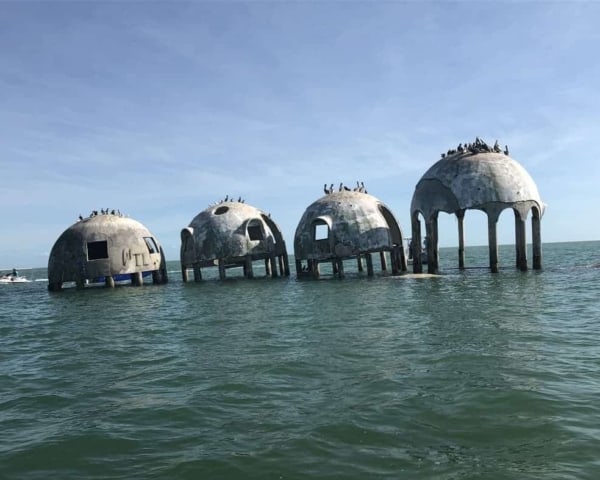 Other Dome Homes In Florida

Now you have the chance to buy a dome home of your own in Florida! However, a unique one is now on the market outside Gainesville.

It’s only a matter of time before Mother Nature claims these structures. Once they are submerged they will become a reef so book your tour now!

Are you planning to explore The Cape Romano Dome House? If so, share your experience here!