The Belfast Peace Walls, known as The Belfast Peace Lines, separate catholic and protestant communities in Northern Islands Belfast. The purpose of the walls was to curb the violence steamed from the outbreak of civil unrest during the riots of 1969. The riots led to a thirty-year conflict known as the Troubles and reflect the civil rights campaign to end discrimination against Catholics and Irish nationalists.

Touring The Peace Walls is a stark reminder of Belfast’s violent struggles, the loss of life, and a reminder that the communities are still divided.

Anyone that visits Belfast should consider the journey through history to learn about one of the most devastating religiously fueled wars that are often under-reported globally and seldom taught in history classes aside from England and Ireland.

Belfast Ireland, or is it Belfast England? A debate stems from the English King Henry VIII’s takeover of Ireland in 1541. Fast forward to modern-day times. The 1919-21 Anglo-Irish War led to the Irish Free State Constitution Act 1922. The Free State Act essentially allowed Northern Ireland to “opt” out and remain a part of England.

Ultimately, Northern Ireland chose to remain part of England, with many Protestants ruling the land. The English, all Protestant, the Irish Catholics, led to racism, discrimination, and point-blank outing of the minority Catholics from their native homeland. No matter what you read on the topic, this is a fact. Catholics were and still are discriminated against in Northern Ireland, although the Protestants are no longer the majority, and times are changing.

The aftermath of the Irish Free State Constitution Act 1922 led to The Troubles of Belfast. The constitutional status of Northern Ireland continues to be a pain point for all Unionists and Nationalists.

The Troubles are a standard part of the English school curriculum. Not just history; it was current news in England at the time. The IRA set off many bombs on England’s mainland.  The bombings were always on the news and typically presented from a Loyalist perspective. Don’t get me wrong; I don’t condone the violence on either side. I’m merely stating that this is not a one-sided story by any means.

Interestingly, bombing and fighting are not the norms years later, and the British Army is long gone. The communities in the inner city still have walls that are designed to segregate communities. Houses still have metal cages that protect them from the potential of homemade petrol bombs.

To comprehend this, you need to see it with your own eyes.

Books You Should Read About The Belfast Troubles

If you plan to visit Belfast and want to understand the plight before you arrive, here are some books that you should consider:

Books About The Troubles

Where The Streets Have No Names

The significance of the Irish rock band U2’s “Where the Streets Have No Name” is that Bono wrote the lyrics in response to the notion that it is possible to identify a person’s religion and income based on the street they lived in. This was in direct reference to Belfast.

Another hit by U2, Bloody Sunday, gets its name from The Bogside Massacre, aka “Bloody Sunday.” On January 30th, 1972, a terrible incident occurred when British soldiers shot 28 unarmed civilians during a protest march against internment – imprisonment without trial. Of the 28, 14 died.

Taking a tour of the Belfast Peace Walls is now a thing or a tourist attraction of sorts. Much as it is, a tour is much more than a photo opportunity or a check-off-the-list activity. It’s a profoundly moving tribute to both sides. While the walls are there for protection and to divide communities, they now pay respect to the causes, the people who died, and the injustice.

Murals cover the peace walls, as do many signatures of famous people who have visited. Dark as it is, sad as it is, the tour is something that all should consider understanding the depths of what happened in Northern Ireland.

Booking A Tour of The The Belfast Peace Walls

Here are several tour options you can book:

When we did this tour, it was 100% underground. I had to find a cabby that specialized in touring the estates. Today, you can book a similar tour via any online operator.

I can’t begin to describe how exciting it was to arrange this tour with just emails and phone numbers! Of course, it was ridiculously dramatic once we made it to Belfast because none of our phones worked. Finding a payphone was like looking for a needle in a haystack, and we begged a hotel to let us use their phone. Once we contacted our tour guide, we were all set. Off we went in a traditional black cab.

How long is the Belfast black cab tour?

Tours typically take two hours; however, you can book a more extended time.

What can be seen on the Belfast black cab tour?

You will see the murals of Falls Road, the Peace Wall, Shankill Road, and Crumlin Road Gaol, and there’s an optional drive past the Titanic Belfast too.

Are black taxis running in Belfast?

Yes, there are several tour operators, and they all run all year long.

On August 15th, 1969, Bombay Street was burned to the ground by a Loyalist mob. This street is an unmarked dividing line between the Nationalist Clonard Area and the Loyalist Shankill Area.

If your heart is beating, seeing the walls and metal racks that protect houses will impact you. It’s a sad sight that will move you. Regardless of any political or religious affiliation, you can feel and smell the travesties that have taken place here. 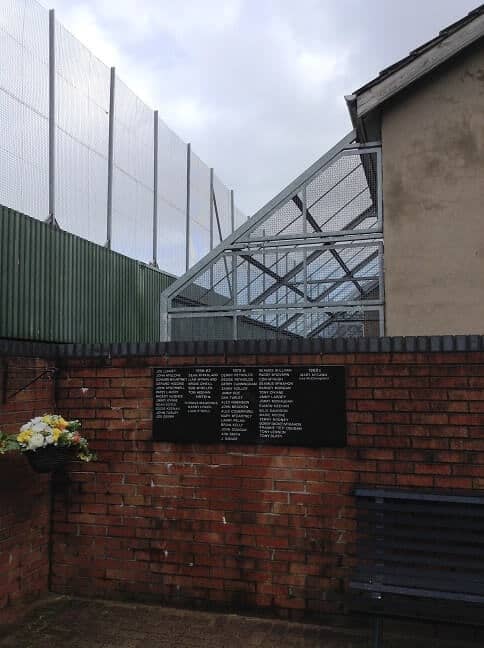 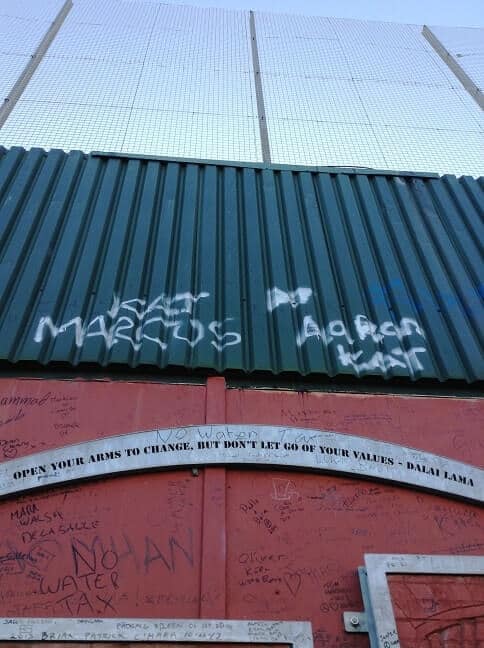 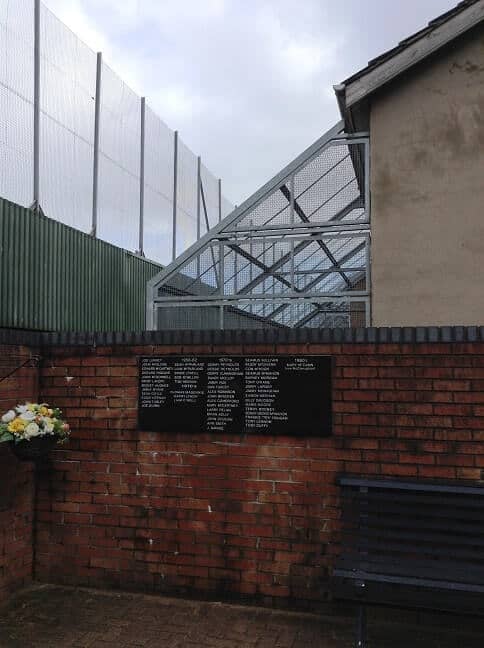 There are at least 97 of them throughout Belfast, separating suburbs. Initially intended to be temporary, they still stand covered in fantastic artwork. The most famous and longest one is the one that surrounds Bombay Street – the area around Falls Road and  Shankill Road. Some peace walls have gates, and four of them are actively closed at 6 pm every night for safety.  I will never forget seeing this. The war ended over 20 years ago, and yet communities are still enclosed behind these peace walls. One other point worth mentioning. By most accounts, the locals do not support removing the barriers.

Here is an example of a gate that gets closed nightly:

Notice the double stacking and height of the wall. During the Troubles, the walls grew in stature, with additions being added on top of the existing structures: 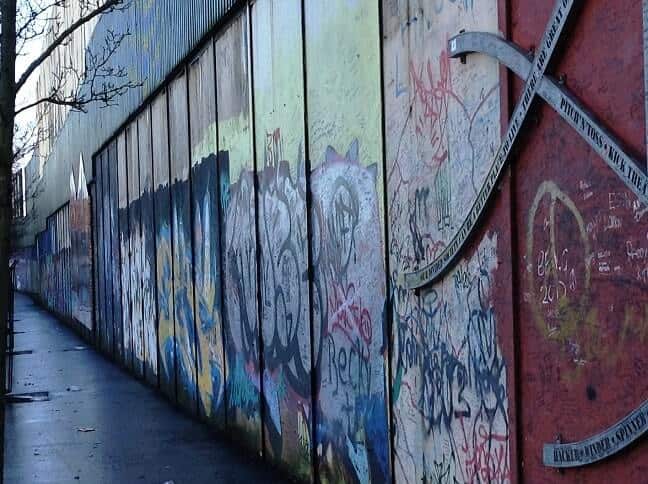 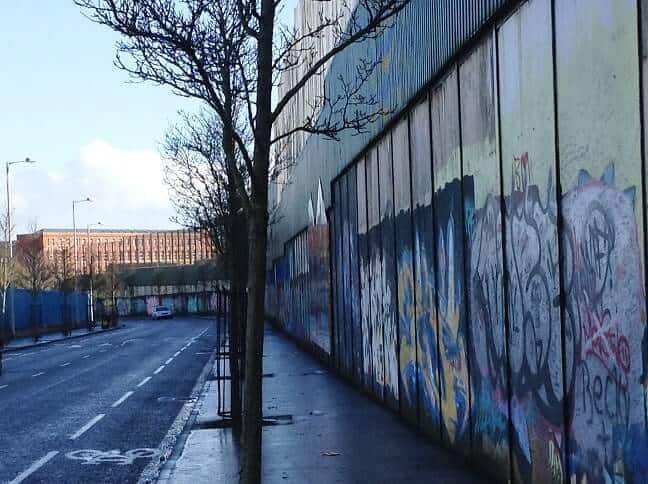 This mural is of King William. Still Celebrated in Belfast. On July 12th, there is the Orange Parade, followed by bonfires. It’s a highly controversial event.  It celebrates the victory of Protestant King William of Orange over Catholic King James II at the Battle of the Boyne (1690). 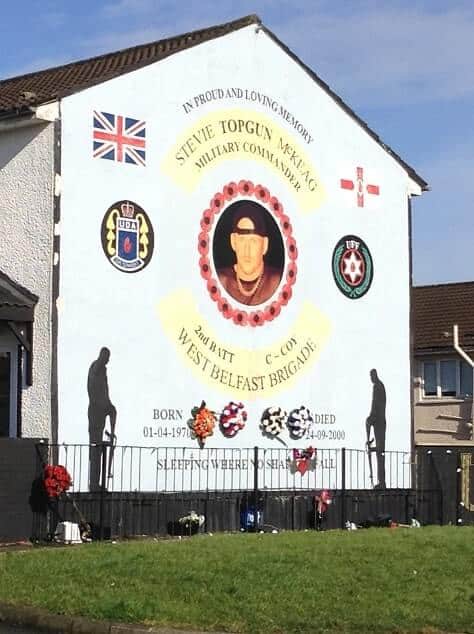 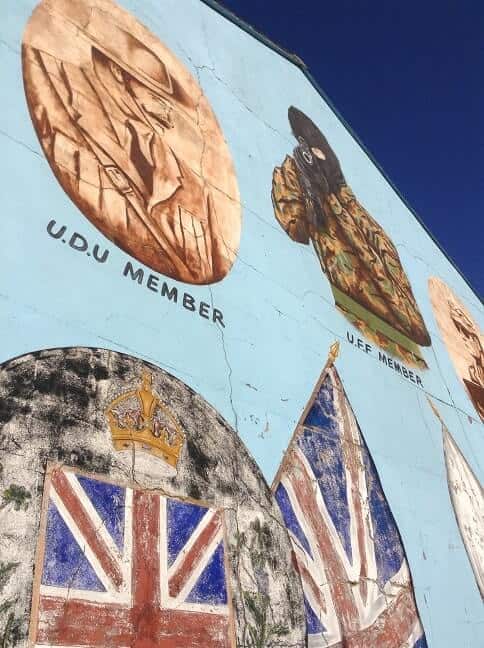 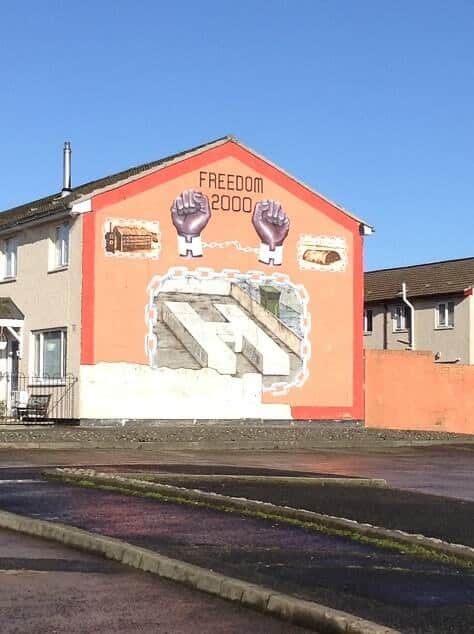 Hopefully, this man requires no introduction. Bobby Sands was a Nationalist who joined the IRA. He’s famous for his role in the 1981 Irish hunger strikes.  Sands died on May 5th, 1981, after 66 days on a hunger strike, aged 27. A hero to all Nationalists.

Getting To Belfast Ireland

You can fly directly into Belfast on many airlines from Europe. Most Americans aren’t flying directly to Belfast. I live in Orlando, and there aren’t any direct flights. Given this, I would still fly to Dublin and then drive up. It’s more popular and cheaper to fly to Dublin, Shannon, or Limerick and see Southern Ireland. And most people don’t have Northern Ireland on their list of things to see.

So how do you make it to Northern Ireland if you have flown to Southern Ireland? You drive! Now, let me be candid here. The north and south are two different countries; one is Irish, and one is English. Car rentals in Southern Ireland have specific clauses that state that you can not take the car to Northern Ireland. Ignore this and proceed on. The GPS will crap out once you hit the border. Don’t panic; you will be fine; use google maps.

Are there still peace walls in Belfast?

Yes, at least east 40 of them throughout Belfast, separating suburbs. In West Belfast, the most prominent of the peace walls can be found between The Falls Road and Shankill Road. Additionally, there are peace walls in North Belfast, East Belfast, Portadown, and Derry.

Why are there murals on the walls of houses in Belfast?

The most famous ones are The Falls Road and Shankill Road. However, you will see them all over suburbs throughout Belfast and the inner city.

How many peace walls are there in Belfast?

There are 97 peace lines and related structures like gates and closed roads.

Where are the Catholic areas in Belfast?

West Belfast, the Falls Rd area, would have the heaviest concentration of Catholics. There are many other areas, but these are most well known.

Are there no-go areas in Belfast?

Belfast’s main areas to avoid at night are the Shankill and Falls roads (West Belfast), Tiger’s Bay, New Lodge, and Ardoyne (in North Belfast), as well as Short Strand in East Belfast. However, they are completely safe during the day.

We only spent a day in Belfast and immediately fell in love with the city. It’s a place that everyone should experience firsthand. Everyone should see the walls that still stand and divide this historical city.  Everyone should understand what happened in Belfast, Ireland, what shapes the culture today, and why there was so much conflict. Taking a tour through Belfast is as good of classical education as you can get!  Finally, the next time you listen to U2, you will appreciate the lyrics’ real meaning.