Located in York, northern England is Castle Howard. Despite its name, it is not a traditional castle. Castles are a fortified structures to defend against attacks, but the term “castle” is often part of an English estate home’s name. Likewise, when a building sits on a prior castle site, the term castle is common.  Castle Howard is a stately home. Furthermore, the term stately home is an English phrase for a large and fine house occupied or formerly occupied by an aristocratic family.

There are approximately 3,000 stately homes in England. Of the 3,000, most are privately owned. Three hundred are maintained by the National Trust, an organization founded in 1895 to promote public access to historic or architectural interest buildings and the land of natural beauty. 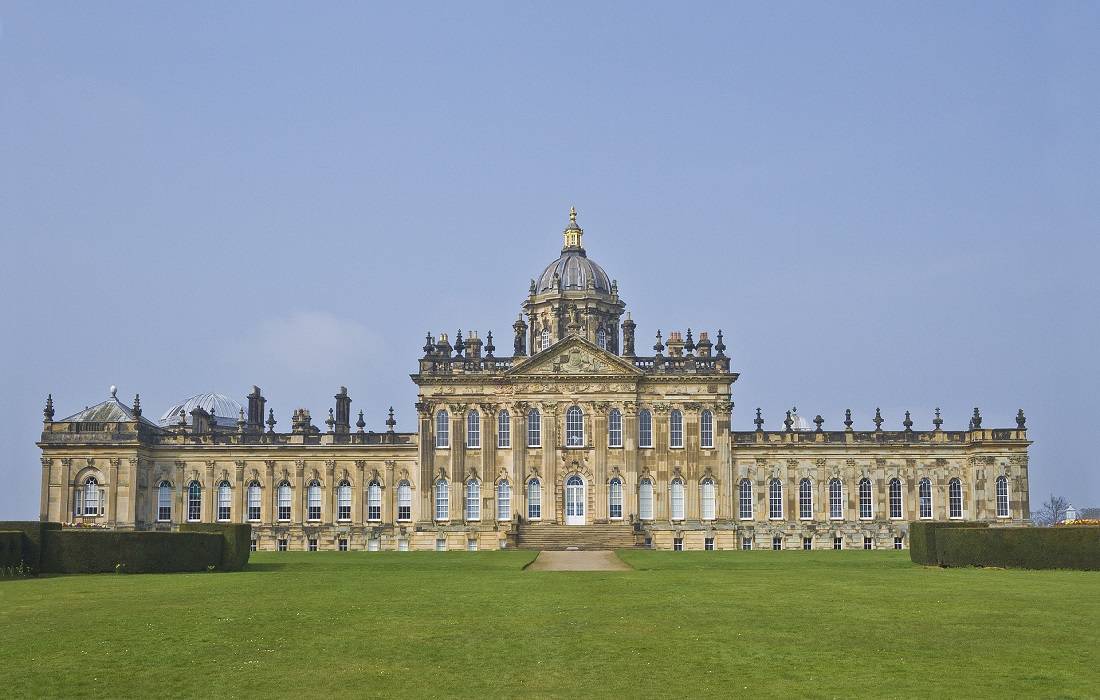 The Family History Of Castle Howard

The Howard family is a famous English family with a long linage.

William Howard is the founding member.  Howard’s family acquired the duchy (the territory of a duke or duchess; a dukedom) of Norfolk through Robert Howard’s marriage with Margaret, daughter of Thomas Mowbray, 1st duke of Norfolk.

Robert and Margaret’s son, John, was appointed The Duke of Norfolk in 1483 but killed in 1845 at the Battle of Bosworth Field, fighting for Richard III.

The execution of Catherine leads to accusations of treason for both Norfolk and his son Henry Howard. Consequently, a series of tragedies and deaths ensued. As a result, it was not until 1660 that the Howards regained the duke of Norfolk’s title.

Castle Howard sits on the former location of the ruined Henderskelfe Castle. Construction started in 1699; however, it took almost a hundred years to build under three Howard Earls.

The design set out to be Baroque, a theme common with the times. However, when Sir Thomas Robinson took over the build, he toned down many of the original plans and added new elements. 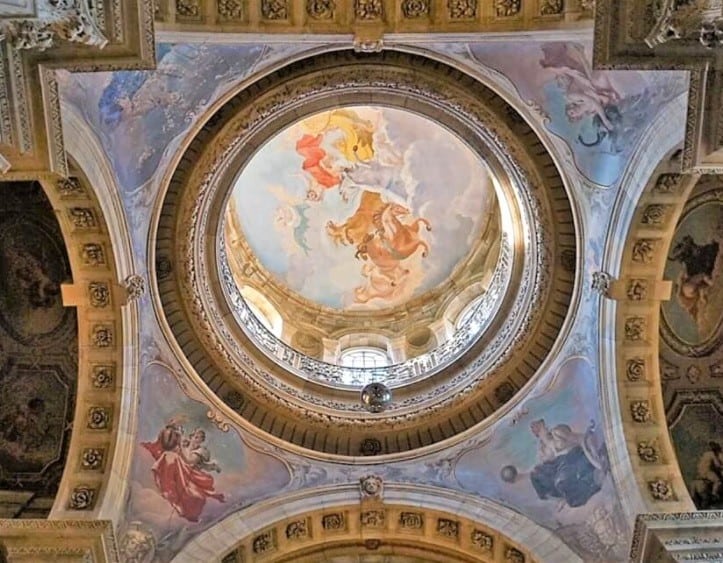 The enormous house and estate boast approximately 8,800 acres and a staggering 145 rooms. Giovanni Antonio Pellegrini decorated many of the rooms inside Castle Howard.

Note: While open to the public, not all rooms are on display and the Howards still live in Castle Howard.

When you visit Castle Howard, you can either take a self-guided tour and explore at your own leisure. Likewise, you can take one of many guided tours.

There are two self-guided tickets:

If you visit Castle Howard for the first time, you must do both the house and the gardens to appreciate the entire estate. The garden option is great for those that have seen the house and want to bask in the expansive manicured gardens.

Choose from any of the following or enquire about a particular area of interest; additional charges apply:

What You Need For The Perfect Day Out

Some past exhibitions include Duty Calls, Magnificence and Convenience, and Mat Collishaw Exhibition.

Step through the wardrobe into an enchanting adventure this festive season. Anicyspell has been cast on this mystical land where it is always winter, but will Christmas spirits be restored, and will warmth and joy return?

The Gardens And Monuments

Castle Howard has vast gardens that span miles. There are formal gardens, lakes, walled gardens, and various temples and monuments enriched with wildlife. For example, it’s not uncommon to see peacocks on the estate. The gardens are ceremoniously listed as Grade I on the National Register of Historic Parks and Gardens. The diverse landscape at Castle Howard is so unique that it needs protection. The estate is home to several kinds of wildlife, ranging from badgers to bats to rare flora and fungi species.

As with most estates on this scale, a formal garden in the front can be viewed from the main house. Symmetrically placed with the Atlas Fountain as the masterpiece.

William Andrews Nesfield is the Atlas Fountain and pond designer, and the sculpted figures are John Thomas’s work. 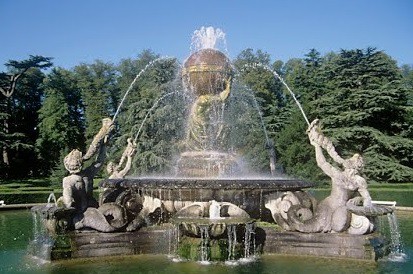 Beautiful as this structure is, it does not have a formal purpose; it simply adds to the view. 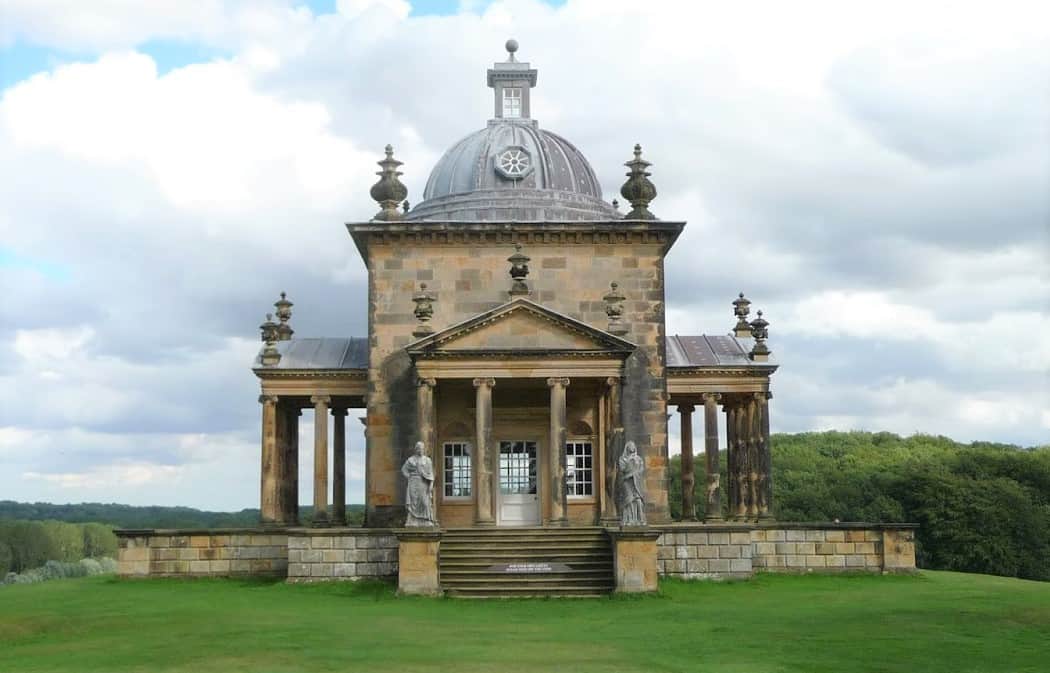 One of the most famous monuments is the mausoleum. The mausoleum is the private burial place of the Howard family. Located almost a mile away from the main house, it is not accessible to the public. You can see the mausoleum from the waterfall at Temple Basin.

This garden houses a collection of plants worldwide with over 800 species of rhododendron, magnolias, maples, and rowans.

Additional Things To Do

Skelf Island is a new adventure playground in Castle Howard. Perfect for children, Skelf Island offers children the opportunity to explore the treetop adventure across the Great Lake’s dormant water.

If you are visiting Yorkshire, England, here are some additional attractions in the area.

One day is not enough at Castle Howard. Therefore, the estate has various options for you to stay on site:

Note: You cannot stay inside Castle Howard, rather on the grounds.

How Much Is Castle Howard worth?

Castle Howard is estimated to be worth $80 million.

Is Castle Howard Part Of The National Trust?

No, Castle Howard is not a part of the National Trust.

How Far Is Castle Howard from York?

Castle Howard is located just 15 miles North East of York and is easily accessible from the A64, which connects Leeds, York, and the Yorkshire Coast.

I have visited Castle Howard many times. As a child, we used to visit frequently. As an adult, I spent time here with my mother as she battled cancer. When you arrive at Castle Howard, you immediately feel like you have transcended into a world lone gone. A world that is excessive, overt, and opulent. Yet, it is oozing romance. You can feel it in the air as you walk around.

When you are inside the house and look at the formal gardens and the Atlas Fountain, you can’t help but wish you grew up here or could move in! Finally, as you walk the gardens, you will be left with a new appreciation for the formal gardens famous for the 1870s.

Looking For More Castles and Estates To Visit? Start Here: