I know a lot of people who’ve been to Rio de Janeiro, Brazil. Everyone who has been to Brazil gets excited when describing it, especially when they talk about Brazilian food.  The downside is Brazil has a reputation for being unsanitary and dangerous. So, let’s talk about taking advantage of everything that Brazil has to offer and why you should consider it even if it may be a little bit riskier than the average place you would visit.

Getting to Rio de Janeiro Brazil

Our trip to Brazil was part of a broader trip that we combined with Argentina and Uruguay. As you know, I am a massive fan of multi-city flights and always try to maximize our spending by visiting a couple of countries over a couple of weeks. This is the travel itinerary along with the costs for two people, including packages taxes and any other fees:

Our flight into Rio de Janeiro was hassle-free, even with a connection. That all changed upon arrival.  Once we arrived, we learned that our bags did not make the connection, and we’re somewhere else in Brazil. At first, this didn’t seem like an issue. I assumed that the bags would show up later that day or, at the worse, the next day. We were without our bags for three days.

This did not phase Brian and I.  Not one iota. We have experienced way worse. We were able to get most of what we needed from the hotel. Then we purchased new clothes and claimed them on our travel insurance. What’s fascinating is that when the luggage arrived, not only was it intact, but nothing was stolen from the cases.  You may say, why would I assume that there would be things missing from the case?  Well, Brazil has a high crime rate. Our bags were missing for three days, and anybody would have had the opportunity to take their pick.

Where to stay in Rio de Janeiro Brazil

We stayed at Copacabana Beach,  the main strip where most tourist tends to linger. There are plenty of hotels to choose from.  We stayed at the Windsor Atlantica, a fantastic hotel with all of the amenities you would expect. It was reasonably inexpensive and centrally located. We were able to walk up and down Copacabana Beach at leisure. I would say we felt quite safe, but there are a few things that you should know about safety in Rio de Janeiro, Brazil.

Almost everybody who has travel experience knows to avoid crowds, and Brazil is no different.  If a group of people approaches you to sell you something, the chances are you are about to get scammed or, worse, robbed. Additionally, in Brazil, a common crime is for locals to start a conversation with you and then grab your jewelry and high tail. Pickpocketing is rife.  We saw this happen several times.

What was baffling to me is that you could do a basic Google search and know that of all the places in the world, Brazil does not have a record for being one of the safest. It’s a third-world country, and poverty is rampant. If you’re touting a gold chain, a fancy diamond bracelet, or even your engagement ring, you’re essentially bringing attention to yourself.  Personally, when I travel to countries like Brazil that have a less than stellar reputation, I don’t take any jewelry with me. I leave it all at home.

Secondly,  only carry as much cash as you are willing to spend that day.  At the end of the day, if you’re going to go out for the night or the day shopping, you probably will not spend more than a few hundred dollars. If you get taken advantage of, all you stand to lose is whatever cash you have, and you were planning to spend it anyway!

Unfortunately, Brazil’s up there with India. It is filthy; there’s no other way to say it.  Every water source you see is littered with trash, debris, and open sewers full of human waste in some neighborhoods. Naturally, there is no shortage of vermin. You can’t drink water from the tap in Brazil. A place where you’re going to need to buy bottled water.

Rio de Janeiro, Brazil, is scorching hot, so as a safety precaution, make sure you take water with you everywhere you go. Clean water is not an issue in the big hotels; it’s quite safe to shower and brush your teeth. Some people recommend brushing your teeth with bottled water. I’m not sure that I would go this far. We did brush our teeth with the water in the hotel, and we were okay. Oddly given the sanitation issues, neither of us experienced any trouble with the food, nor did either of us get sick. If you are sensible and take the necessary precautions, you will be fine.

I don’t even know where to start with the food.  Frankly, it was like a daily orgasm in the mouth. I’ve always enjoyed the Brazilian fair. There are several restaurants in Orlando that we frequent, but nothing compares to Brazilian food in Brazil.  I can confirm everything you’ve ever heard about the food is real; it’s phenomenal. I would also add the food is inexpensive. You can eat at a good restaurant for under $20. Brazil may be one of my most favorite countries that I’ve eaten in. Not once did we have a bad meal. Likewise, caipirinha drinks are everywhere; they are ridiculously strong, which ultimately leads to a cheap night out. 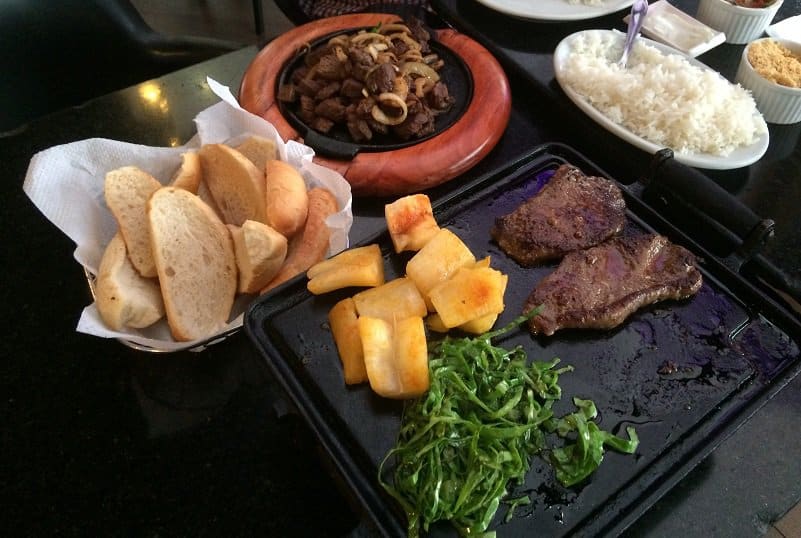 Things to Do in Rio de Janeiro Brazil

A favela, by all accounts, is a low-income neighborhood, a shantytown, or a slum that is cobbled together. The Favelas in Brazil are a result of the end of black slavery. As people were freed, they migrated to the city. Unable to afford proper housing, favelas were born. If you visit, you’ll understand why I say cobbled together. The infrastructure is patched together. Buildings are built on top of each other. It isn’t very comforting when you look at how the electricity has been wired.  Add to this building with no architectural plans,  staircases with no railings, and in some cases, no running water. Despite this, these favelas run just as well as adequately constructed cities. 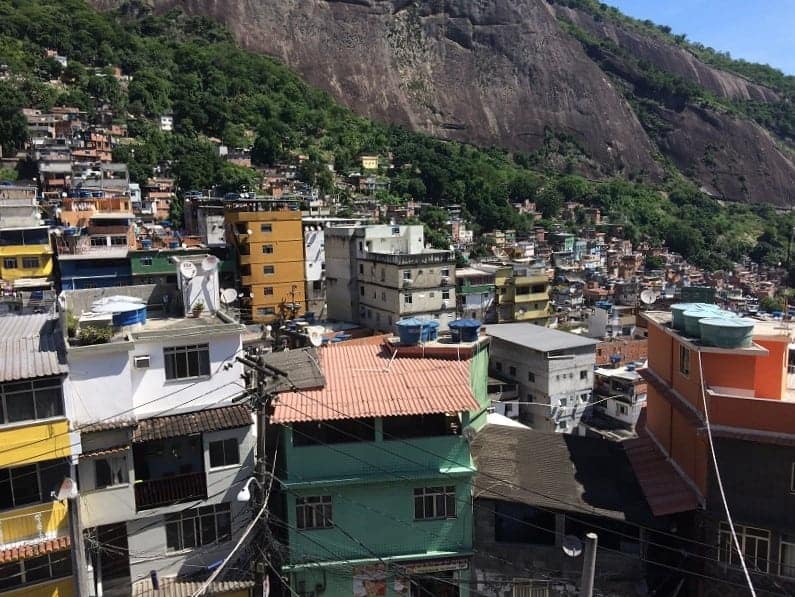 We visited the Rocinha favela near Ipanema Beach. Rocinha is the largest favela in Brazil and is home to over 100,000 residents. It’s like a city within a city.  Rocinha is built into a mountain’s side, and it’s a tall climb to the top.  The locals take the bus or scooter up and down for a couple of pennies.

If you decide to visit a favela, you will need to book a tour. We booked a trip through the hotel.  I felt safe visiting the favela, more so than I expected.  Locals greeted us, and many gave us a tour of their homes.

Some people will say that this type of tourism glorifies the living conditions of the poor. I’m afraid I have to disagree.  It provides an income for the locals and education to those visiting. It’s a win-win — a creative way for both sides of the industry to benefit.

There are many other favelas in Rio de Janeiro, Brazil. You will pass them as you drive from location to location.  You will see massive walls that were created to hide them purposely for the Olympics. Ironically, as much as they were constructed to protect unsightly slums, you don’t need to see it know what’s behind the wall. 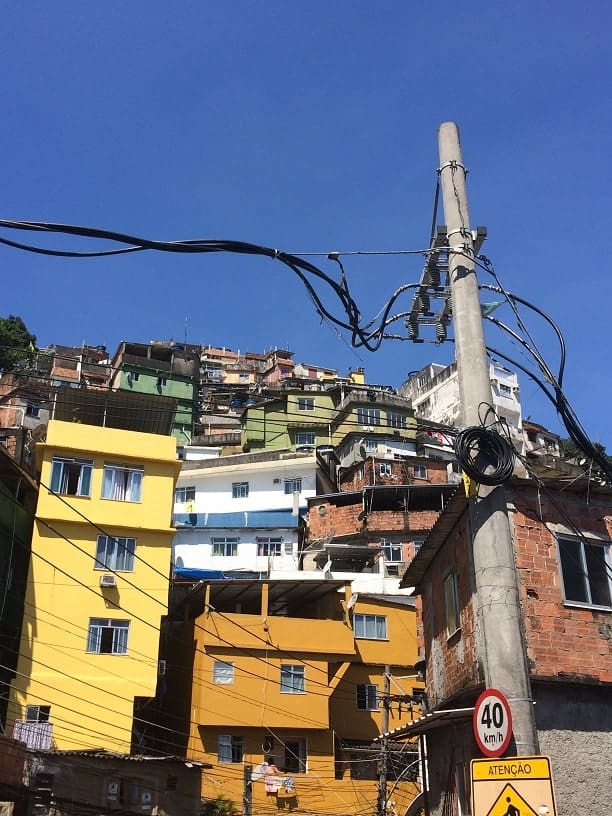 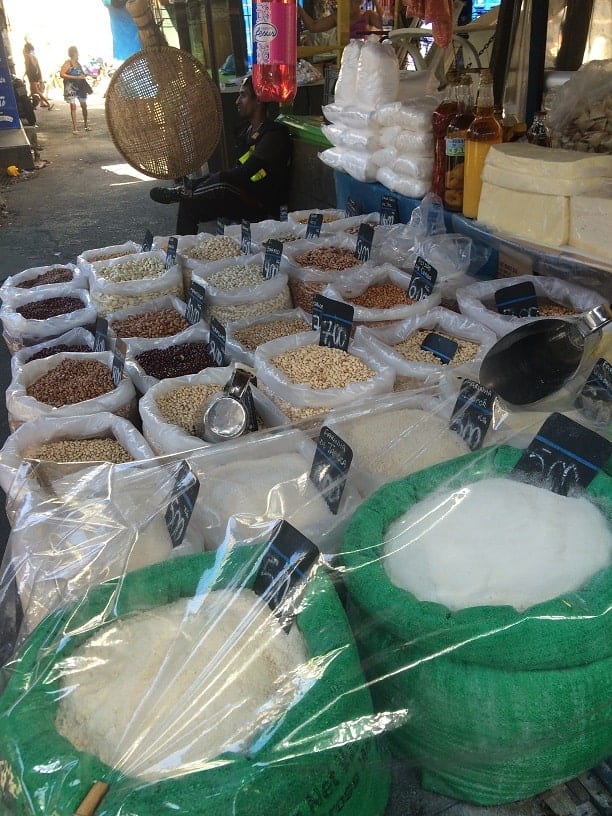 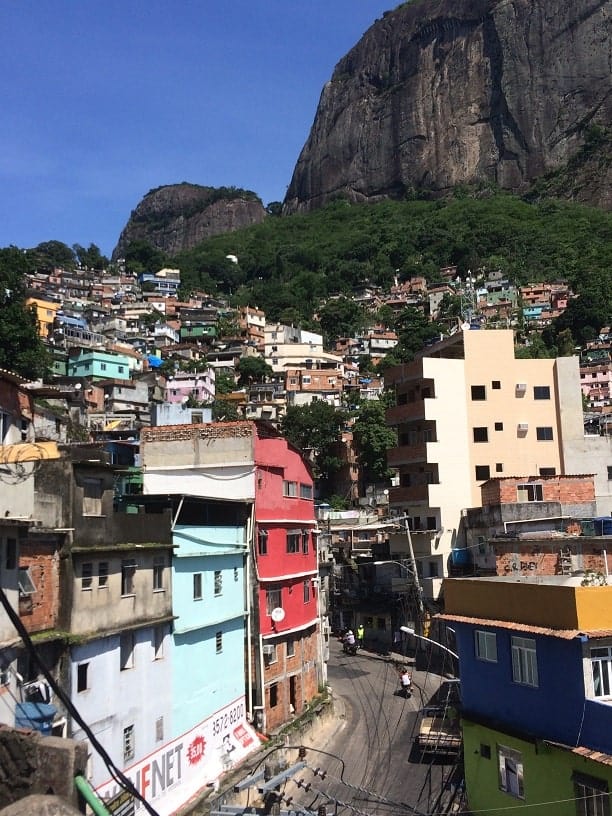 If you’re in Rio de Janeiro, Brazil, you must see Christ the Redeemer. You can see him from a distance sitting atop of Corcovado mountain. The Catholic statue is 98 feet tall, and the arms are 92 feet wide. Easily viewable from Copacabana Beach, but from a distance is not quite the same as being up close and personal.

Getting to Christ the Redeemer is easy. You could book a tour, but it’s not needed.  I recommend taking a taxi or Uber.  If you’re up for it, you can take the bus or train.  Something to consider if you choose to take the bus is that there have been several instances of robbed tourists on the way up.  I think most people chance this for a couple of reasons: one, the scenery is said to be spectacular and two it’s a very economical way to make it to the statue my days of taking buses across third world countries are over, and I’m sticking with door to door service.

Once you are there, join the thousands of people admiring the size of this epic, iconic tribute to Jesus Christ.  Everybody in the world recognizes Christ the Redeemer and knows it’s synonymous with Brazil. Getting a decent photograph will prove to be challenging. Everybody else is trying to get the perfect shot. Instagram has not done any of us any favors here because what would have once been an acceptable photograph is no longer. 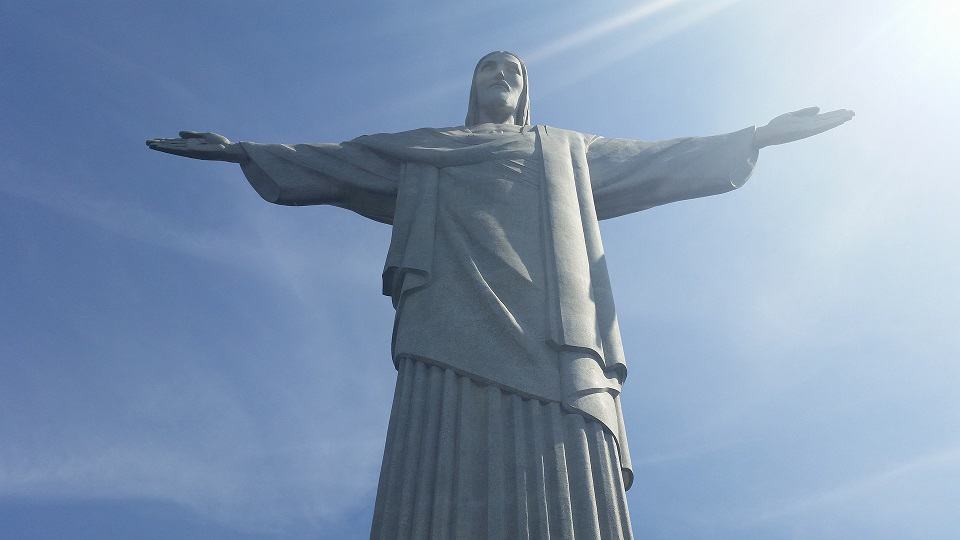 Another iconic backdrop for Brazil, Sugarloaf Mountain, is known by all. Sugarloaf Mountain has a cable system that allows you to travel to the top of the hill.  Typically I’m scared of heights, but there’s something about a cable car that’s not overly intimidating to me.  However,  when booking, I was trying to persuade friends to come on this journey with us. Most engineers found the idea of taking a Brazilian cable car on the side of a mountain a suicidal mission. I think the cable cars were constructed very well. They might not be tested to American standards, but they appeared to be in fantastic working order. 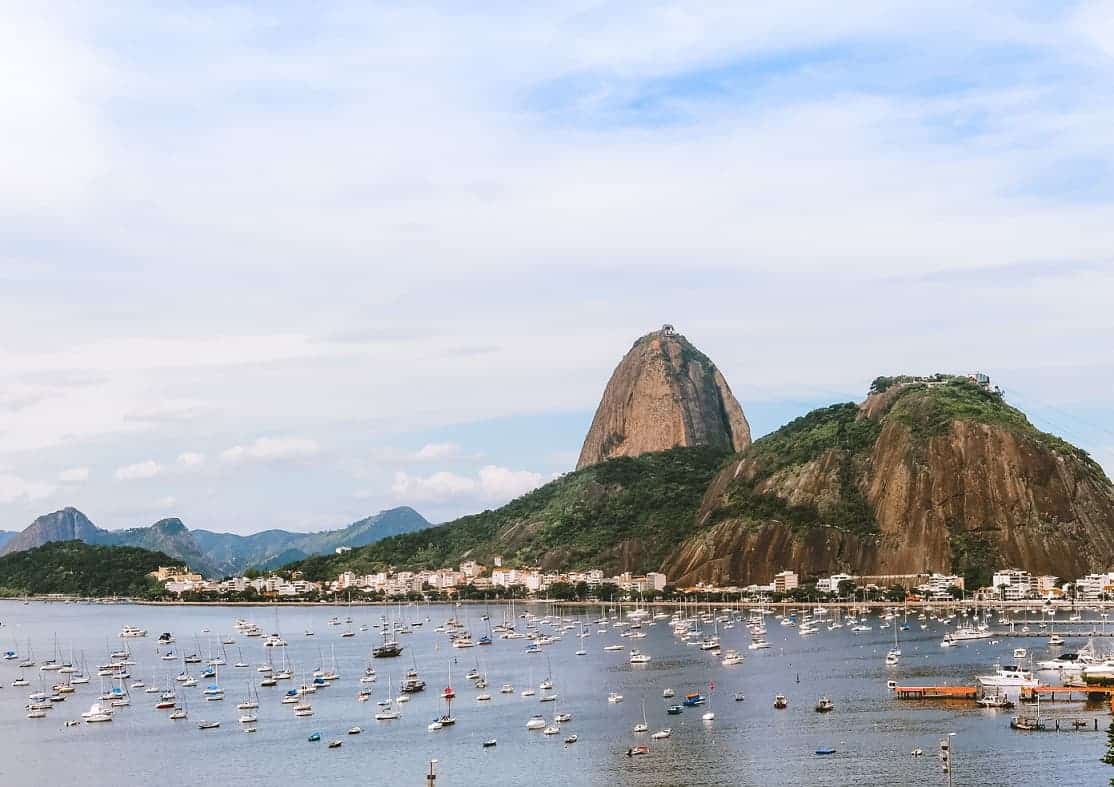 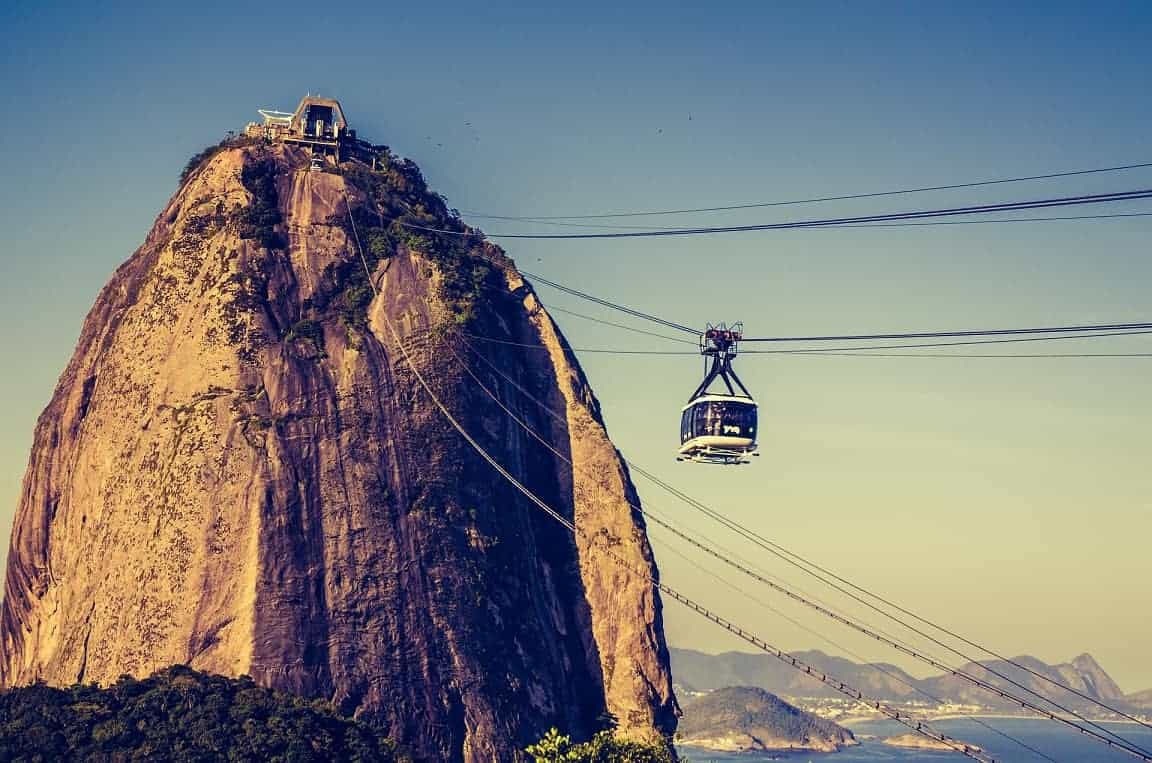 I’m not a massive fan of sunbathing. Spending a day frolicking in the sand or bathing in an ocean whose host is notoriously dirty did not appeal to me. Never mind sharks, I was more concerned with human waste. I didn’t see any, and by all accounts, there is no reason to be concerned, or so they say.  Having seen the streets and the pollution, this beach is not for me.

As mentioned, beaches are not necessarily my thing and not in Brazil. Regardless, I did enjoy taking in the sights at Ipanema Beach. There are plenty of restaurants where you can enjoy a cup of coffee, a beer, or a quick bite to eat.

Suppose you are en route to Christ the Redeemer on Corcovado Mountain stop at the Dona Marta Lookout. This lookout will give you the best view; there are few crowds, and the lookout is rarely covered in clouds. 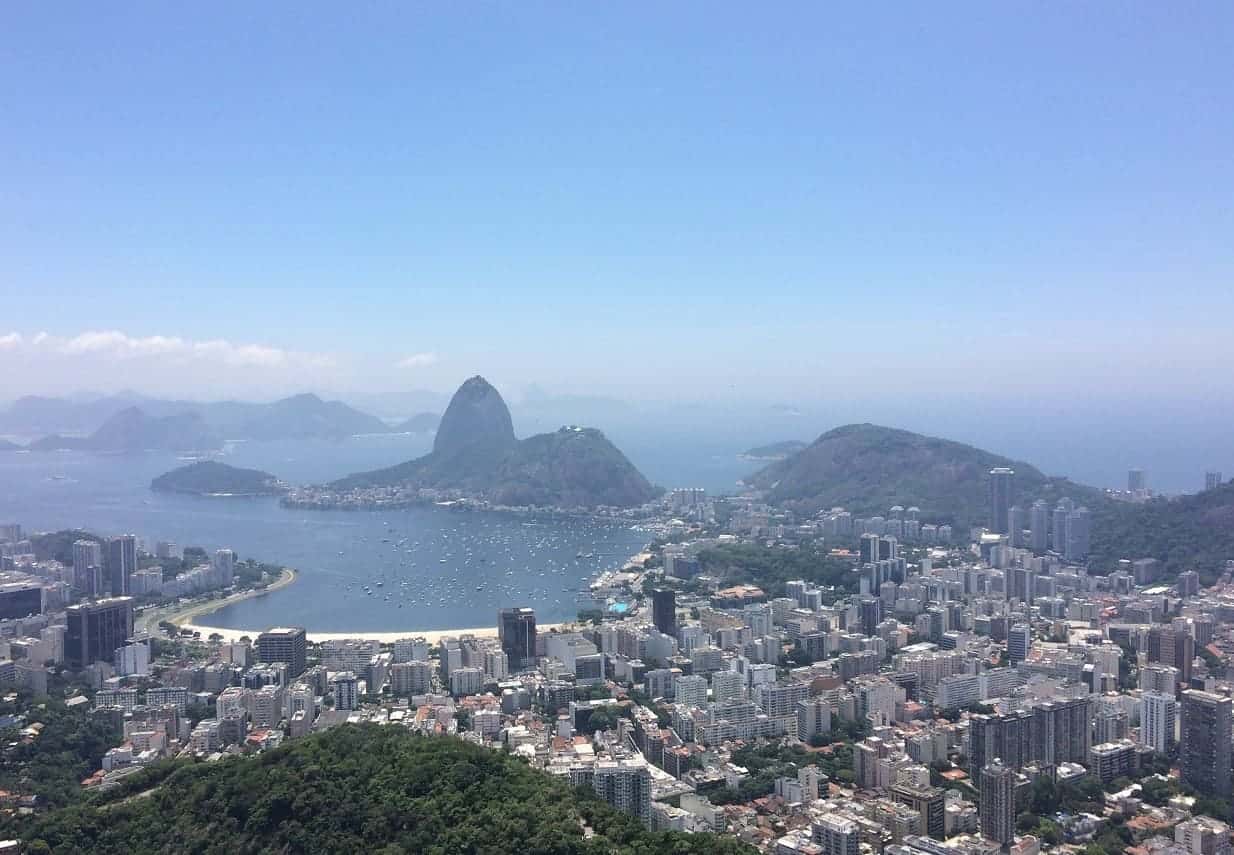 What You Need to Know:

Brazil may be a tad edgier than some destinations. It’s certainly not the Caribbean, and it’s no Costa Rica. It is un-Americanized heaven with more culture to take in than the average holiday destination. And, did I mention the food is to die for? I know that we will revisit Brazil. We love it!

Nikki Webster is a travel writer who covers how to travel while grinding a day job, how to travel without breaking the bank, hotels, cruising, and off-the-beaten-track experiences. She is particularly fond of Florida and writes extensively about the state. She flies around 60,000 miles per year and has visited 54 countries, 50 states, and six continents. You can read all about her travels at www.britonthemove.com.