Many of us would like to travel to Barbados, and it’s one of the most beautiful of all the Caribbean islands.  In addition to having some of the most beautiful beaches globally, this nation is an independent British Commonwealth nation. Additionally, it is home to sea turtles and shipwrecks, both of which can be easily explored.

Barbados is home to nine shipwrecks. Some are located just off the coastline and can be explored with a snorkel. And some of the shipwrecks have anchors, cannons, and other artifacts that make it even more exciting to discover.

As mentioned, there are a total of nine shipwrecks you can explore if you travel to Barbados. Many of them are located in Carlisle Bay.  A variety of wrecks can be found in this ideal dive location, which offers excellent conditions for beginner divers. You will find turtles, tropical fish, eels, frogfish, and seahorses. Hence why Barbados is often called “The Shipwreck Capital Of The Caribbean.”

The Six Shipwrecks In Carlisle Bay

Several shipwrecks can be found in Carlisle Bay, close to the capital Bridgetown. Carlisle Bay’s marine park is home to six shallow wrecks. From the most shallow wreck to the deepest: Barge, Cornwallis, Berwyn, Bajan Queen, C-Trek, and Eilon.  These shipwrecks are home to tropical fish, groupers, sea horses, and frogfish – a photographer’s dream.

One of the smallest of the shipwrecks the Barge was a naval landing barge. It was sunk in 2003 and is sitting in 15 feet depth of water. The wreck is flat with no openings so not as exciting as others. Many reef fish have made their homes inside this naval landing barge, including the porcupine fish, which is a relative of the pufferfish.

As early as the 1960s, the Bajan Queen was known as the Pelican. Ten years later, the ship was converted into a party boat and renamed the Bajan Queen. When it was no longer profitable, it was donated to the Coastal Zone Management Unit  (an agency of the Barbados government charged with monitoring and protecting the country’s coastal areas).

The 120-foot Bajan Queen was sunk in May 2002 to be used as a tourist attraction. You can see it several feet below the surface. The Berwyn hasn’t been underwater as long as some of the other shipwrecks. Regardless,  coral and fish have already accumulated. Given how close this ship is to the surface of the water, it is easy to swim down to it to explore. It is even possible to swim through the bridge!

I traveled to Barbados specifically to snorkel a shipwreck. Now, I have to be honest I am a chicken when it comes to darkness in the water.  While I wanted to experience a shipwreck I didn’t swim through the bridge. I chose to stay at the top and admire it from above. Far too eerie for me. I’ve experienced it, I am happy that I did but I doubt that exploring shipwrecks is going to be a thing for me. 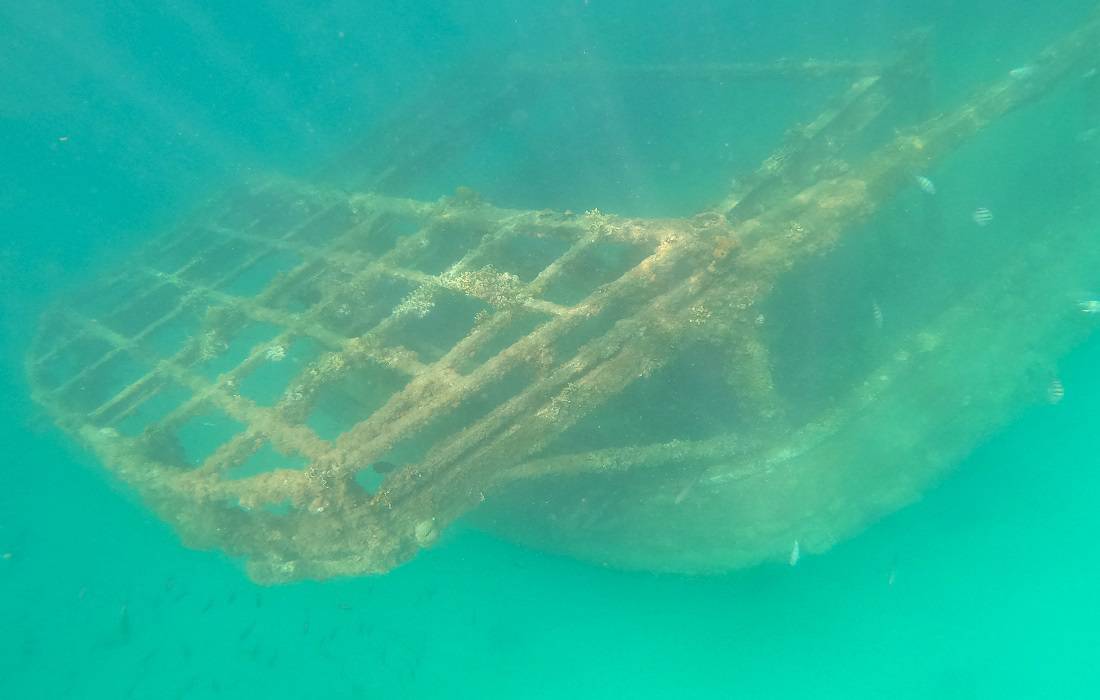 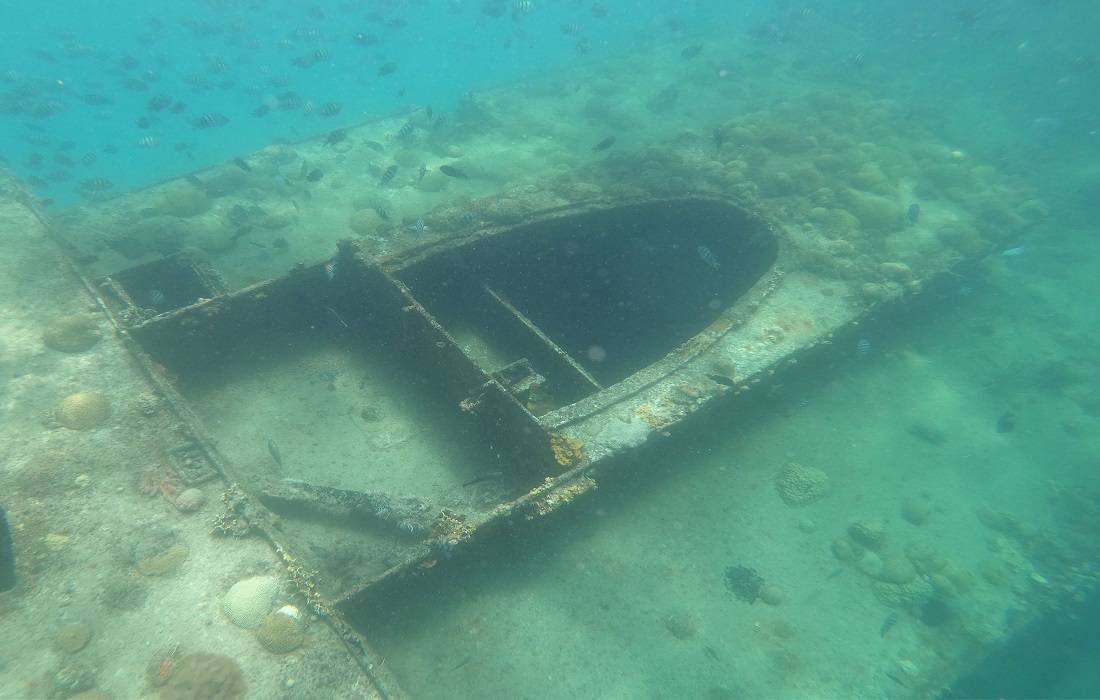 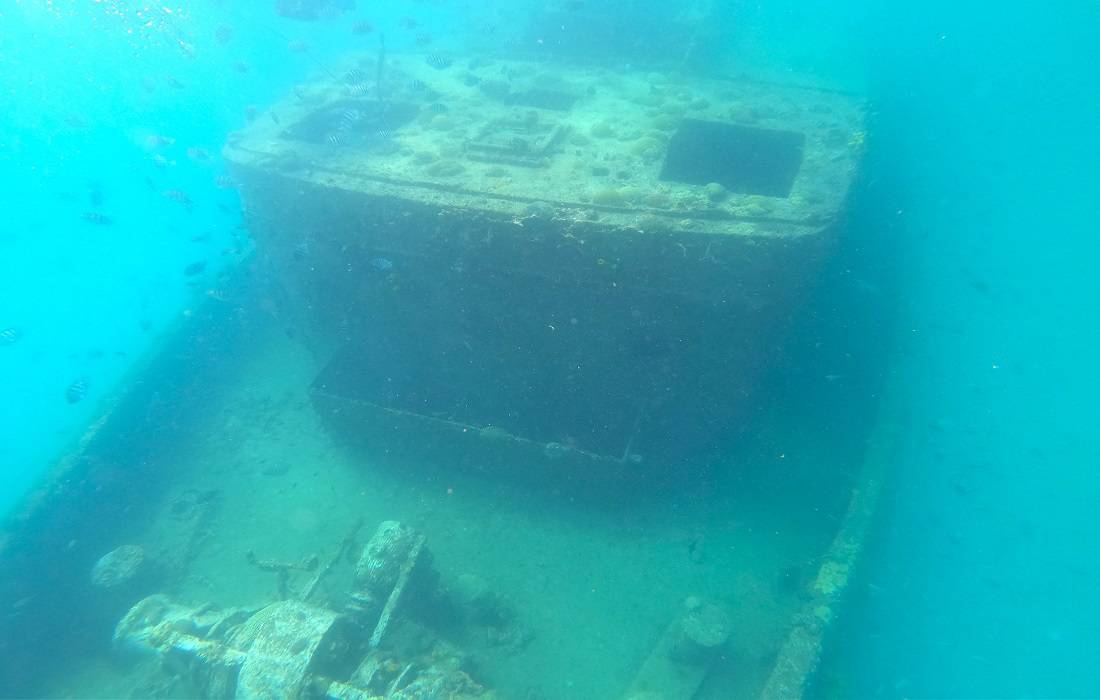 Strangely enough, the Berwyn (a tugboat) was sunk by its crew in 1919. In late 1918, the crew of this 60-foot vessel didn’t want to leave the island when the war ended. A French military ship came into the harbor during World War I. The captain allegedly replied, “over my dead body and a sunken ship.” Consequently, his rebellious crew sank the ship, and – as our tour guide said – “they sunk the ship and went back to the island for more rum!”.”

Depending on the tide level at the time, Berwyn sits 7-10 feet below the water’s surface. Due to its age and the fact that the waters surrounding it are always calm, this wreck attracts a variety of marine life as it does.  The Berwyn is one of the best shipwrecks for snorkelers.

An abandoned boat, the Ce-Trek sunk in 1986. It sits on top of a concrete structure. Though freediving is possible in the waters surrounding this shipwreck, scuba diving offers better viewing.

A German U-boat torpedo sank this Canadian freighter during World War II in 1942.  The relocation of the shipwreck didn’t take place until 2003.

Perhaps the most popular for tours. This six-year-old drug boat sunk at the Bridgetown Careenage Marina on June 8, 1996. The Elion landed in Barbados from Colombia. Authorities seized and searched the ship suspecting it contained drugs. After pulling off the interior wall of the vessel, they discovered that the walls were lined with marijuana. The Barbados government kept control of the vessel. Once all the legal issues were resolved, the Elion was brought to Carlisle Bay and sunk there.

It measures 110 feet in length, has a large hold and you can navigate through the bowels of the ship. If you are brave enough, swim through the engine room and climb the spiral staircase that leads out onto the deck.

Explore The Shipwrecks On Your Own

Carlisle Bay’s shipwrecks are incredibly accessible,  situated about fifty feet from the shoreline. You can literally swim out to it or take a tour if you prefer. As mentioned, we did take a tour but it’s not really necessary.

If you are arriving on a cruise ship, the best-kept secret is you do not need to take a tour! You can take a cab to Carlisle Bay or walk.  The best part, it’s totally free. You can snorkel from the beach and access most of the shipwrecks from the beach. There are buoys and buoy lines that mark the shipwrecks in the Carlisle Marine Park. Plus you will see all of the boats and tourists gathered floating above where the shipwrecks are.

One mile off of the South Coast of Barbados, this magnificent wreck rests in 55 feet of water. Once a 100-foot Dutch freighter it sank in 1984. This wreck is home to hawks back turtles, tropical fish, blue tang, squirrelfish, peacock flounders, crabs, lobsters, and the occasional stingray. In 2004, Hurricane Ivan caused significant coral damage. Fortunately, the reef has recovered.

The Stav or SS Stavronikita is a Greek freighter.  365 feet in length it was severely damaged by fire off the coast of Barbados in 1976. The boat was towed back to Bridgetown, where it stayed for about two years. Located in 120 feet of water, Stavronikita is one of the island’s best wrecks dives.

The wreck is approximately 165 feet long and 60 feet deep and is situated north of Barbados. This location is considered an excellent spot for beginners to dive.

You can’t travel to Barbados and not have turtles on your mind.  As such, they are popular attractions in Barbados. Numerous tour companies offer turtle swimming excursions. Tour operators are all over, especially in Carlisle Bay as are the turtles.

I saw at least eight turtles in and around the Bajan Queen. If you opt for a tour the guide will throw fish into the water. The turtles grab the fish which lets you get a good look. It’s amazing to see them up so close.

In Barbados, sea turtles are highly protected, and there are several laws and regulations that protect them.

A sea turtle may not be caught, or any turtle product (i.e., meat, shell, eggs) may not be possessed in Barbados. The maximum fine is $50,000 Barbados dollars (approximately $25,000 US dollars) and two years in prison.

Feeding is allowed, but swimming, chasing, or prodding them is not

If you plan to travel to Barbados you need to add two things to your list! Snorkeling in Carlisle Bay to see the shipwrecks and snorkeling to see the turtles!